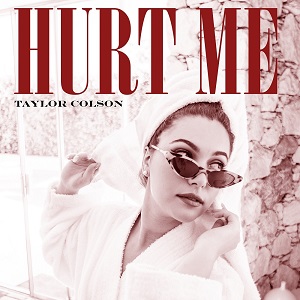 “Hurt Me” (Single) by Taylor Colson

Slinky vocal harmonies. An eroticized finger-snapping. Piano keys that ache with the sort of lust entire motion pictures are written around. In her new single “Hurt Me,” singer and songwriter Taylor Colson isn’t concerning herself with keeping up with the biggest trends in the American underground today – she’s too busy unleashing a brutally provocative anthem of poetry and pressurized melodies. Without getting too indulgent with the aesthetical fireworks, Colson seemingly goes out of her way to produce as theatrical a performance behind the microphone as she can muster from within the four walls of a recording studio in “Hurt Me.” Her presence is made all the more profound by the high-end production quality of the single, but don’t get me wrong – she’s the kind of singer who would probably sound just as good acapella as she does in this scenario.

There’s definitely a lot of versatility to the beat here, and though it’s a little restrained compared to what it could have been (were the melodies given a bit more of a rock-inspired edge), it yields a crossover appeal with R&B, alternative rock and indie pop that wouldn’t have existed here otherwise. Flexibility can make or break a piece of material like this, but luckily for Taylor Colson, her talents give her plenty of room to work with a fluid harmony amidst a rigid rhythm – all without sounding scattered or super-left-field. That takes some serious ability, and it’s not the sort of thing you can practice into existence at all.

While there isn’t much urgency to the groove under the verse in “Hurt Me,” I don’t really think there needed to be in order for us to feel the pressure, tension and downright intensity of the hook at all. The iciness of the vocal delivery puts us over the top in that regard by the time we get into the first chorus here, and even if the beat sounds a little sluggish as we hit the refrain, it’s important for us to pick up on the unbroken catharsis fighting its way to the surface at this part of the song. There’s a method to Colson’s madness, and as difficult as it might be for some novices to grasp, it’s the kind of thing that will keep hardcore pop fans like myself coming back to her music time and time again.

“Hurt Me,” without question, is one of the most affective pop tracks I’ve listened to this summer, and from the looks of it, I think it’s going to set the tone for everything Colson releases in the future. This is a statement single for her young career, and while there are quite a few different crooners in her peer group to contend with – rivals Nya, Sarah Clanton and the Joyner twins come to mind right out of the box  – it’s obvious she’s got what it takes to keep the pace with the best of them here. I’m a fan, and from here on out I’ll be anticipating a lot from Taylor Colson’s professional output.