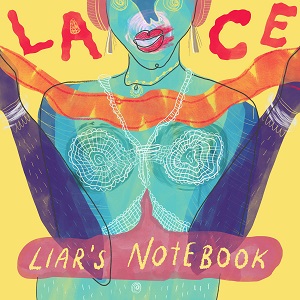 There’s a swagger to the swing of the string play in “Liar Liar,” the first song we hear in Lace’s new record Liar’s Notebook,” but it isn’t coming solely from the confidence of the musicians in this collective (including Emi Desire). The very nature of the rhythm of this track implies sensuality and a provocative charisma that comes from a night of passion on the dancefloor, but the beat is far too jagged to simply dance to. As we listen on, more leaves start to unfold and a flower of an EP blossoms into the beginnings of an amazing career for Lace, who combine the artistry of a South Indian groove with the freeform SoCal personality of a modern alternative powerhouse.

“Liar Liar” is a song I spent a lot of time with when I first listened to Liar’s Notebook, and though what comes next in the tracklist – “Lima (featuring Alina Sarna)” – is rather short and acts more as a bridge from one concept to the next, it doesn’t qualify as being filler in my book at all. The strings, the spoken element, even the faint traces of a noisy texture that seep into the mix from beneath the harmony; all of these intricacies are influencing how we’re going to perceive the opening bars of “Bird,” a song that brings Emi Desire back into the booth for more of the excitement started in “Liar Liar.” Everything happens quickly in this EP, given that its roughly sixteen minutes long from start to finish, but the music comes alive patiently (never in a rush).

“Bird” is the vocal masterpiece of Liar’s Notebook, but its lyrics don’t feel quite as imperative to understanding the emotion in the music as the way they’re delivered to us is. Execution is everything in the soul genre, and by putting more stock into how they’re saying things than the means of their actual poetic expressions in this record, Lace make it pretty difficult to step away from this short collection of songs without having felt something. Love them or hate them, this is a collaborative project that isn’t taking the time to finish their debut EP with any of the compositional trappings we would expect of a pop affair in 2020 – in fact, they’re rebelling against the very idea.

Liar’s Notebook comes to an end with its longest track, “Remember” (6:14), and I would be lying if I said that when the song was over, I felt completely satisfied with what I had just listened to. There’s nothing artistically wrong with this extended play – in fact, it’s rather brilliant in every department – other than its being an album trapped inside of an EP’s body. Lace are a group of musicians who need to be given the time, recording space and appropriate format to really share their gifts with the world in the best way possible, and in order for us to really know who they are, we’ll need to hear the sequel to Liar’s Notebook as soon as they can muster up the strength for another round in the studio.