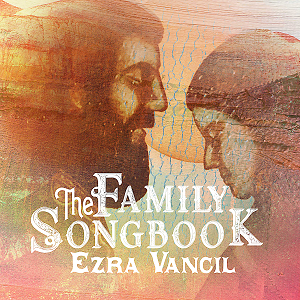 Fate is an unpredictable mistress. Ezra Vancil’s album The Family Songbook began in one direction and ended pursuing another. The album began as a twelve-song long meditation on his connections to family, but the dawning of a pandemic forced Vancil to alter his plans. When lockdowns severed his connection to the musicians working with him on the release, Vancil turned to his then twelve-year-old daughter and finished the album in his home studio. His long experience performing with a variety of indie rock bands sharpened his already existing skills and deepened his songwriting talents, but his daughter is a natural raw and obviously gifted musical artist who transforms the release for the better. The Family Songbook is a happy accident of sorts and its rewards bear a lot of fruit for music lovers.

It is likely, if not certain, we would have heard an equally fine release if the pandemic never happened. The Family Songbook would have a very different sonic identity without the pandemic, to be sure, but an abiding theme remains alive in its different incarnations. Vancil adopts the traditional artistic idea, taken from the novel, that family and a sense of community are the ultimate subjects for artists to examine. It isn’t a shallow effort. Incorporating his daughter’s talents into the work has a transformative effect, without question, and deepens the level of intimacy with listeners while sustaining its accessibility

The opener “Big Old House” will spur some to recall the vocals of prime Cat Stevens, but the gradual build of instrumentation and overall character of the track is pure electric folk. There are a small assortment of pop elements working in the cut as well, particularly its rousing chorus, but it never lays on too much pomp. Cozi Vancil’s vocals, the aforementioned then twelve-year-old daughter, makes an immediate impact on the album.

“Follow” possesses moments of deep beauty thanks to the complementary vocal talents shared by Ezra and Cozi and the song’s solid structuring. There’s an unerring focus on dramatics in Vancil’s songwriting, but it is always measured rather than slathered on with an indiscriminate touch. You can give tracks such as “Glow” the label of near orchestral electric folk pop as it manages to blend an uplifting synthesis of disparate musical strands. Many listeners will likely rank this track as among the finest included on The Family Songbook. It introduces effective new instrumental sounds to the album.

More of the fine acoustic guitar work heard throughout this release distinguishes “Hero Song”. It abides by the template earlier songs observe, Vancil definitely has an identifiable style, but brings enough imagination to bear on the music that you never feel like he’s repeating himself. The touch on the six string is particularly lyrical, but it does an excellent job of maintaining a steady rhythm as well. It will stand as a highlight of this release for many. Cozi Vancil’s contributions on the title song are among her finest moments. The vocal melodies are a consistent strength of this album song after song.

The studio patter you hear during the album’s finale “Shine” enhances the finale’s intimacy. The fat backbeat, however, gives the performance an authoritative tone it might have otherwise lacked. It’s the empathic ending that this album deserves. Ezra Vancil sustains the album’s theme throughout and utilizing his daughter’s skills proves to be a shrewd move rather than a shallow gimmick.