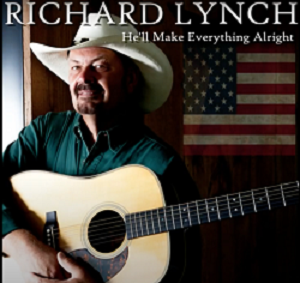 Richard Lynch has a backstory worth hearing just as much as his latest single, “He’ll Make Everything Alright,” which comes out October 2nd.  Lynch’s album released in 2019 produced five top 40 country singles, so it is a tall order to cover this artist without having heard of Lynch or anything previously released by this Ohio-based wonder.  It does not matter once you dig into the music of any such hiding star, because the music always speaks for itself, and Lynch comes with no exception to that rule.  “He’ll Make Everything Alright” is not what the title seems, it is more positive than it might suggest to the masses.

“He’ll Make Everything Alright” is a spiritual message to the people, not a political one.  The song and video only suggest things by way of symbols and signs that everything will eventually be alright, once the dust clears and the rain washes away the dirt of the current culture.  I am not trying to guess exactly where Lynch is coming from, but it’s a good measure of it anyway, with a title that can fool as to what it means.  At the end of a song, what’s in a title always comes to mind but can confuse before it is even heard.

Country music radio knows Lynch like the back of its hand, but I had never heard of him, so I was intrigued to know what’s so special about him that finds played on AM/FM stations from the Midwest to Canada and beyond.  I came to find out I am out of the loop when it comes to Lynch, but glad to discover him and this song is only tipping the huge iceberg on which he sails.  It turns out Lynch has been hiding beneath my radar all along, but I was able to catch up through his vast social network following and see that he’s been successful for three decades.

The best thing about “He’ll Make Everything Alright” for me is not the lyrics or subject matter, but the way Lynch carries a traditional country tune with the best of ‘em.  You never know what is out there, and that is why this ticket comes as such a great surprise to me.  Lynch has no lacking musical prowess, regardless of his chosen genre or what country music represents across the board, which is now a variety of things it traditionally has not covered in the distant musical past.

While Lynch has an illustrious past, it’s easy to digest him on this single, but it’s also worth noting that he’s on a roll when it comes to radio hitmaking, and it is bound to stay cooking.  “He’ll Make Everything Alright” serves as a current message of hope to the people paying attention to the hate, hunger and disaster going on after enough years of accumulation in society.  Without hope, certain folks have nothing to guide their spirit, and that’s what country music, soft rock and other genres are always good for.  Lynch earns awards and high honors without even knowing about him, and this song proves all-the more why he is getting so much traction.