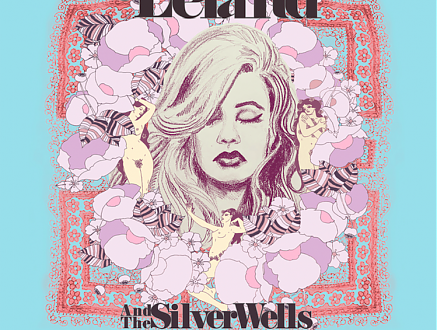 When you fuse together a homespun string arrangement, ethereal vocals and a pastoral beat, you don’t just get “Coming Down,” one of nine magical slabs of psychedelic pop offered in Leland and the Silver Wells’ stunning new self-titled record; you get a glimpse into what pop music can sound like when you remove all of the commercially-conceived barriers between an artist and her craft. Sporting a sublimely surreal style of attack that recalls the early experimentations of David Bowie and Lou Reed, Leland Ettinger unleashes pure pop gold in her latest compilation of original songs, and critics are taking notice. September has traditionally been one of the weaker months on the calendar for releasing new music, but as we all know, 2018 has been anything but a traditional year.

It might not be a concept piece, but Leland and the Silver Wells flows better than almost any other record that I’ve had the pleasure of reviewing this year. It almost reminds me more of a page-turning novel than it does a full-length LP in that once we get started in the first track, “We Dissolve,” it becomes next to impossible to put this record down until we reach its epic climax in the finale, “Play it as it Lays.” I’ll admit, I’m guilty of cherry-picking albums when I first get ahold of them in hopes of sifting out the gems, but this record comes so-fully loaded that shaking the tree for nuts doesn’t just seem redundant but disrespectful of the effort put into the work.

The melodies present in Leland and the Silver Wells are reminiscent of 1980’s shoegaze, but Ettinger is careful not to shove the volume over the threshold of the group’s collective tonality. Music of this variety is very often overindulgent when it reaches the finishing stages of production, but it’s evident that a lot of time was spent refining the rough edges of each and every one of these verses to make every track feel like an individually arranged symphony of subtle tones and immaculately conceived rhythms. The fact that these compositions are for the most part exercises in understated existentialism and still manage to utilize all of the space in the Silver Wells’ soundscapes is a testament to the band’s inventiveness.

It would be nice to see their dedication rub off on the other bands in their scene, who haven’t shown nearly as much passion when it comes to developing their output. Lately it’s been feeling like once artists get to a certain level of comfortability in their professional lives that they start to back away from their own involvement in the music that they’re recording. Leland Ettinger doesn’t have any time for that kind of lazy attitude though, and if you share her disdain for music that falls short of creating an atmosphere around every possible twist and turn, you’re going to absolutely fall in love with what she and her talented backing band have assembled for us here. Check out Leland and the Silver Wells when it’s released this September – I think you’re going to like what you hear.

User Rating: Be the first one !
Share
Previous The Chordaes California (single)
Next Musik and Film Radio Promotions