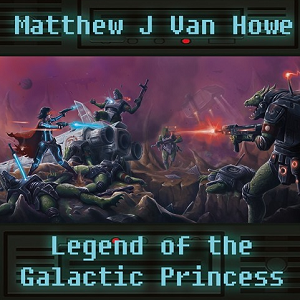 In an ominous lurch, “Awake from Thy Tomb” opens up Matthew J Van Howe’s colorful new album Legend of the Galactic Princess in true SNES-fashion, alluding to much of the old school futurisms that will populate the majority of this tracklist. The groove evolves into a cult-like tide of noise and melodicism, directly turning us over to the suspended animation of a surreal “Set Forth,” the first really forward piece of material here. The gut-punch from the synths only gets stronger as we wade into the dark pool of “Jungles of Syroolya,” but as anyone who reaches this point in Legend of the Galactic Princess is bound to find out, turning back from this quest once embarking on it is a lot easier said than done.

“Across the Starry Sea” lives up to its atmospheric name and segues the sonic narrative of the previous song to that of “Battle Cruiser” seamlessly. The latter is more Bowie-esque than the other tracks here, but let’s face facts – the diversity of this arrangement only adds to the chills factor the record as a whole already had going for it. “Her Greatest Lost” is coarsely industrial and fearlessly more indulgent than anything the mainstream would have allowed onto the FM dial this year, but it’s also one of the most moving songs on the album for this same reason. It’s here that no one can deny Van Howe’s indie authenticity; and foremost, his dedication to staying to the left of any other players in the Chicago underground right now.

“Right the Wrong” is Legend of the Galactic Princess’ natural-born lead single, and its vocal harmony – particularly around the 2:30-2:45 mark – has such a brooding profile that it would almost be a shame for Van Howe not to make a music video better exploring the emotional themes of the song. “Beneath the Dust” and “Reborn the Warrior” are almost as captivating from an instrumental point of view, but “Right the Wrong” feels like the soul of this LP embodied within one sleek, relentlessly playable single that fans of this artist’s previous work, as well as unfamiliar listeners, would be able to get into and appreciate equally. The title cut is too progressive for radio, but I’d be lying if I said its climax didn’t feel exceptionally powerful for a synthpop song.

We reach the end of Legend of the Galactic Princess in the arms of a fleeting emotional epilogue ala “Waterfalls of Dymoora,” and when the music fades to black, it feels very much like the final credits of an epic motion picture are drifting out of focus as well. Legend of the Galactic Princess has a cinematic quality that I usually have to sift through an hour-worth of camp and progressive filler to reach, but instead find readily accessible in this record, as if made to greet me from the second I press play onward. Matthew J Van Howe’s music genius is hard to ignore here, and he’ll be staying in my sights for some time to come because of it.

Pamela Hopkins “Back When” (SINGLE)