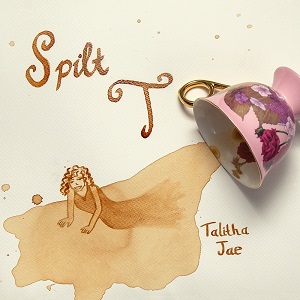 Talitha Jae, an Australian singer/songwriter, has just released a delightful debut EP, “Spilt T.” With her lovely inviting voice and soft bluesy indie folk sound, Talitha Jae has created a highly listenable little bundle of songs that lead the listener through the good and bad parts of love and romance. Her music is approachable without trying too hard; she sings about emotions and thoughts many people have when falling in or out of love. In just six tracks, Talitha Jae tells a story as old as time; boy and girl meet, flirt, fall in love, and fall apart. While the basis is nothing new, she is able to breathe fresh life into it. It feels like she’s letting you read a bit of her journal, instead of just trying to write a pop song.

“Butterflies & Anxiety,” the single off of “Spilt T,” is a beautiful, warm track that speaks to the hesitation at the beginning of a romantic connection. This song really frames up Talitha Jae’s vocal and songwriting skills, capturing her soulfulness. It feels authentic, and really describes how it feels when you aren’t sure if you can let yourself fall in love with someone. It’s the kind of song that almost anyone could hear and it would make them think, “Yup. Been there.” It’s a truly charming song that definitely stands out.

Another track on “Spilt T” that stood out was the final song, “I’m Done.” This is a classic “I’m moving on” kind of song and it’s awesome. It has humour and strength mixed in with the sorrow of a relationship ending. Talitha Jae chose a more upbeat sound, which I think did the song a lot of favors. Instead of coming off as bitter, the track felt more carefree and “over it.” It’s the sound of someone who really is letting go and moving on. She even has “I’m Done” end suddenly, making it feel like she really cut her ex off. It was a clever way to have even more fun with the concept of things being over.

Talitha Jae has gained rapid recognition over the past few years in the Australian indie/folk scene. She placed third in the folk/acoustic category of the 2019 Australian Songwriters Association Awards and placed second at the Tablelands Folk Festival Songwriting Competition. She was also a top ten finalist (2018) and a semi-finalist (2020) in the Listen Up Music’s Songwriting Awards. She was given three slots at the Tablelands Folk Festival in 2020, including the highly coveted “Pub Ballroom” venue. She has also been invited to play with Australian singer Clare Bowditch, as well as the Wolfe Brothers and the Pierce Brothers.

“Spilt T” is a gorgeous collection of songs, and Talitha Jae clearly has a wealth of talent. It would seem she’s poised for a great career in the folk scene. Her music is super approachable and deals in feelings that everyone can connect with. And with that voice, I think she can sing just about anything she wants.