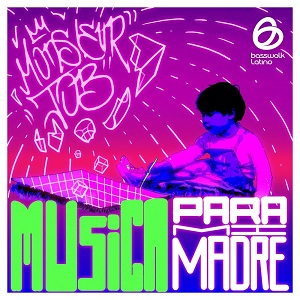 Wasting not one second getting into the lusty beats that will soon shape the narrative for not one but twenty-five of the best songs in their discography, Monsieur Job start up Música Para Mi Madre ready to crush the competition in “Capri.” The rhythm is big and smothering in certain spots, but the structurally conflictive “Da Funk” will soon prove that complexities of tempo and execution alone are hardly the only fireworks in this LP. “Backstabbers” is more relaxed in its delivery of massive beats, while the equally stealthy “Dashat” flirts with jazz accents often left out of the equation among similar acts this summer.

Monsieur Job doesn’t seem all that concerned with what their peers have been experimenting with in Música Para Mi Madre; the bounce of “Eduardo y Adelaida” mashed together with the anxious beat of “Eme Jota” and rocky swing of “Irony’ tells me that they’ve been more preoccupied with their own elaborate concepts than they have anyone else’s. It’s hard to picture “Madrid 87” or “I Dream in Colors” coexisting in the same tracklist were it not created by these players, which says less about the eccentricities of this disc as it does the depth of talent these musicians bring to the table.

“Piel Roja” and “Thank You JESUS” demonstrate much of the minimalism influence Monsieur Job manipulate into something quite unique and untethered to the commonplace styles we’ve heard in the mainstream lately, but they don’t make more indulgent offerings like “Rapsodia” and the profoundly postmodern “The Guiding Light” sound over the top by comparison. Contrarily, songs like these, the retro “Soul Slurp,” low-fidelity “Another Casualty” and “Collage” suggest a duality within this group’s sound that I foolishly didn’t pick up on earlier in their career together.

“The Life” is another versatility showcase, as is “Varanasi,” and I think that one of the greatest points we encounter from one song to the next revolves around chemistry and how these guys use it to their advantage, no matter what the setting or backdrop happens to be. “Kiss the Rain” and “Uno Con El Mundo” were born of continuity, and largely the conceptually progressive values Música Para Mi Madre was formed around from “Capri” to “Corre Caballito – Remix.”

“Red” and “Spinner – Remix” contrast structurally, but the chills they produce in the audience just from their textural presence alone is enough to make the theatrical “Chinga Tu Madre” and “Changes” sound incredibly simple, which brings me to the best feature this record has: its unpredictability. There’s never a song that sounds like it was the logical segue between two tracks – neither filler nor pop conventions of the more mainstream variety find their way into the mix here, but rather a fluidity created solely by the experimentation Monsieur Job is so eager to employ.

They could make a believer out of even the most discriminating of critics in this record, and while I came into this review already impressed with their sound, I’m stepping away from Música Para Mi Madre all the more addicted to what they’re all about.