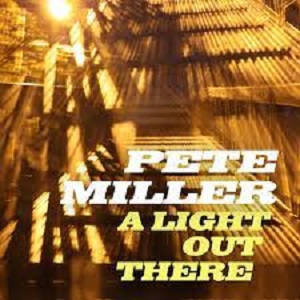 Pete Miller “A Light out There” (SINGLE)

Where a lot of his contemporaries seem to have a problem overthinking the Americana they’re weaving into their music, Pete Miller has no such issue in his new single “A Light out There,” the first release to bear his name in the byline. There are no fireworks here, nor a sense of pop hybridity hanging over the aesthetical core of the track. Miller is being himself and, more importantly, letting the song develop a persona all its own, which is why it instantly feels more accessible and organic than the vast majority of content debuting this season.

The focus this player has when he’s digging into the verses is quite inspirational and the product of a lifelong talent as opposed to hours of repetitious practicing. This isn’t to discount the implied discipline behind Miller’s play, but instead to award him a bit of credit for the natural abilities he has that can’t be taught in any school, no matter how dedicated the pupil might be. His ‘it’ factor shines even brighter with nothing else but the guitar in this master mix, and I hope this isn’t the lone stripped-down piece he shares with the audience in 2022.

There’s a fragility to the harmonies in this single that is breathtaking and rather odd considering how hard Miller is getting after the swing of the rhythm, but the contrast ultimately works to his benefit. He wants us to know that duality is a crucial role player in his artistry, and were he not allowing juxtaposition to be an element that shapes the way we interpret this song, we might not have noticed just how skillful he is in this department – especially when compared with a lot of his peers in the American underground right now.

I detect a heady Bob Dylan influence in the stylization of this poetry, but I wouldn’t say that Pete Miller is recycling anything from the ‘60s school of folk. The crossover folk/rock aesthetic is present in his construction of the verses, but without anything electric in this mix to spotlight his rebellious tone, it comes and goes clandestinely in comparison to the pastoral hue over the lyrics. He’s got time to diversify the sound he’s working with, but even if he keeps it just as we’ve heard it in “A Light out There,” securing a loyal group of listeners shouldn’t be too difficult at all.

Singer/songwriters like Pete Miller don’t come into the mainstream light often enough anymore, but with a track like “A Light out There” to his name, I think this artist will find a route to the mainstream that has evaded a lot of his competition thus far. His independent ethic and antiestablishment drive in this performance make me hungry for more of his work, in or outside of the recording studio, and with all of the increased interest in folk and folk/rock at the moment, I believe Miller couldn’t have found a better moment in modern history to make his foray into showbiz.