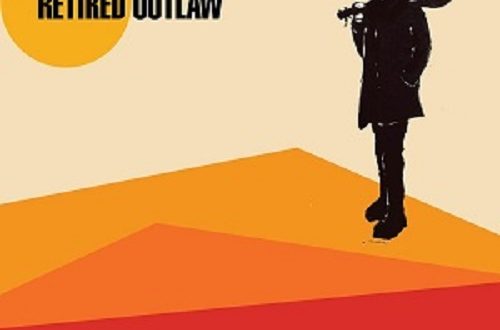 Crash Taylor’s 2022 album Retired Outlaw is another release we can thank COVID-19 for. Taylor’s written songs since he was ten and has since recorded many times but didn’t decide to release his first album until the pandemic caused him to consider it. Taylor is a writer as well and his lyrics for the ten song set reflect this. He mixes conversational diction with arresting imagery to create a voice unlike any other; Taylor doesn’t break new poetic ground, but his “voice” is undeniable.

It comes through loud and clear in the first line for “Fret Board”. It’s almost a pledge of allegiance to hear his calm voice declaring his guitar fret board the equivalent of an Ouija Board. He expands on that first line quite nicely and takes listeners in satisfying and unpredictable directions. The music for the opener gives listeners a formula he follows for the remaining nine tracks with inventive variations and elaborations along the way.

Acoustic guitar often forms the backbone of this material. “Idlewild” is an excellent example of how the stalwart instrument is a foundational part of Taylor’s presentation and likewise boasts some of the album’s strongest melodic values. He pairs it with an electric counterpart here and it further embellishes the melodies without ever slipping into overkill. Percussion is solid throughout Retired Outlaw and gives “Idlewild” more inches on its bounce.

“Nothing to Lose” will have a lot of fans. It’s a surefire live number for Taylor as well capable of rousing even the deadest audience thanks to its hard-charging thrust and powerhouse lyrical imagery. It’s his best vocal performance as well. Some of the material for Retired Outlaw steps off the beaten path, never too far, but “Nothing to Lose” has broad-based appeal.

There’s a near-gospel feel surrounding “How Love Grows” and it’s a good fit for the track. Taylor has an obvious predilection for reflective songwriting, but the lyrics here expand his lens far past the prison of self. He’s trying to say something elemental about the nature of our connections. The organ playing gives this song a quiet simmer.

“Mona Lisa” takes a 180 turn from the songs before it. Blustery lead guitar kicks in the door during this track, but it backs up its bravado every note of the way with lyrical phrasing and melody. The three keys for this song’s success are the guitar, lyrics, and a low-key yet engaged vocal from Taylor. Few artists would have the audacity to end any album with an instrumental, much less their first recording.

Taylor has no hesitation. “Nuptial Song” closely hews to the spirit of the preceding songs and moves the goalposts on his limits. It’s obvious Crash Taylor is a polished singer and songwriter with a clear vision for his art. He’s far from finished, however. Perhaps Retired Outlaw may have a successor, but we can all be a little happier knowing that, come what may, Crash Taylor will be writing and singing songs as long as he’s able. That’s good enough, if nothing else.

User Rating: Be the first one !
Share
Previous Pete Miller “A Light out There” (SINGLE)
Next Not Ashamed “In Spirit and Truth” (SINGLE)