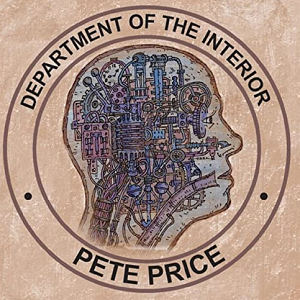 Pete Price Releases “The Department of the Interior” (LP)

From its first moments, Pete Price’s new debut record The Department of the Interior enters the room like a gust of fresh air. Ripe, crisp rock instrumentals greet listeners with a rush of energy as “Diamonds in the Sky” opens with guitar work that feels comparable to a lightning bolt. It’s an outstanding opening to the song, and the entire track feels like a brilliant introduction/re-introduction to Price and his musical ambitions. Ohio natives may recognize Pete Price from The Fries Band, his stomping grounds for the last three decades, but The Department of the Interior marks Price’s first solo release and it feels like a distinct and unique departure.

Fiddle-fueled “The Crossing” follows “Diamonds in the Sky,” its melancholy lyrics feeling like a classic rock track — there’s a decent weight to the story element of the track and the strings on the track give a great texture to the overall vibe of the song. “Before I Go (feat. James Mills)” changes the speed a little bit, giving listeners some counter-programming that ultimately complements the two previous songs; it’s a slightly slower change of pace adorned with great backing harmonies and a keys solo that transitions into a short guitar solo.

The track embraces ‘80s rock wholeheartedly, further adding to Price’s long list of influences and styles. “Common Ground” features a chorus of guitar parts that feel perfectly balanced, and the heavy subject of Vietnam lends itself to the track with a solid amount of gravitas. This track has the best of the album’s instrumental work yet, feeling almost orchestral in its layering of guitars, fiddles, and bass, among drums and vocals — it’s an extremely engaging track about the futility of war, and the way the song is composed is very confident, as it should be!

On the softer side of things, “Green Flash” comes in with female vocals in the opening verse as a gentle acoustic guitar slowly brings things to a powerful finale — while the track doesn’t ever explode into a bombastic soundscape, maintaining its taut and refined acoustic sound, the duet is powerful in its restraint. “Old Movies and You” continues the trend of slower tracks, tackling the subject of loss and survivor’s guilt. It’s a moving track that gives an emotional peek behind the curtain of Pete Price, offering an open display of his heart.

“I Love Soul and I Love Rock” goes back into the harder side of things, and it’s a good track! Its placement between “Old Movies…” and another soft, smooth listening track “Foolish Heart” feels like a minor misstep in the album’s sequencing, as the emotional weight of the two songs feels cut off in the middle, but the balance of the album is still pretty impressive, overall. “Taste of Freedom” is a bluesy track complete with a saxophone solo that steals the show, and “Legacy of Love” brings the energy back down to Earth with a soft, group-vocals-led track about the quest for love; there’s a lush acoustic guitar solo and some intriguing piano pieces here and there, and the track pushes for the case of The Department of the Interior’s back half being the best half.

“Let It Go” and “One More Time” close the album out, with the former serving a faster-paced rock track while the latter leans more into classic country-rock; it’s clear that The Department of the Interior is an album unlike anything else getting released right now, and Pete Price has more than enough experience to deliver on an album as varied and eclectic as this one. All we can do now is wait for his sophomore release!