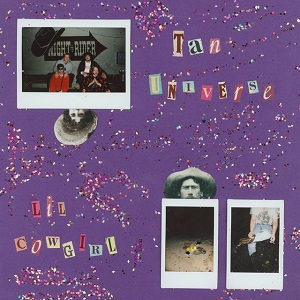 Ashville, North Carolina’s Tan Universe is a trio self-described as “surfedelic garage-punk”. It may sound silly until you hear their music. Their new single “Lil Cowgirl” lives up to its billing. Listeners may strain, however, to hear the surf in Tan Universe’s music. Daniel O’Grady, however, has an unshakable vision for the band’s music and his bandmates drummer Lawson Alderson and bassist Jack Ryan are ideal foils for realizing his ambitions. The trio plays with loose limbed confidence throughout the entirety of the track and the thick intoxicating haze hanging over the track gives it an appealing late night feel certain to attract a considerable following.

Some will definitely come away from the track, however, believing it runs on too long. There is a smattering of textual shifts incorporated into the song, but such variations are limited. Tan Universe crafted a memorable tapestry for the song but variations on the central theme are scarce. Others, however, will appreciate the relaxed meandering despite the six minute plus running time. Trios often suffer from the lack of a second guitarist to fill holes in the mix, but it isn’t the case with this band. Tan Universe achieves a full-bodied sound that will work just as well in a live setting as it does on this studio recording.

O’Grady’s voice has a dollop of post-production effects altering his delivery. It’s a clean vocal, otherwise, and his vocals harbor deceptive power. He’s equally as capable of lulling listeners to sleep as he is delivering a swift kick to the head with an impassioned yowl. O’Grady’s lyrics for the song are dissolute, a bit ribald, and completely slice of life. Portions of the lyrics are immersed in the mix and thus indistinguishable, but those moments are scattered and never undermine the song. The feel always comes through, and he invests every line with audible commitment.

The band’s rhythm section, especially the drums, supplies the necessary foundation. Alderson’s drumming makes an emphatic and physical impression on listeners without ever vying for supremacy in the mix. They reach another level during the track’s final lap as O’Grady bears down on his guitar and begins riffing with unexpected intensity. “Lil Cowgirl” ends much more chaotically than it begins without ever lapsing into disarray.

It’s far from Tan Universe’s first single and it will not be their last. What began as a solo vehicle for O’Grady has turned into a band of equals. They boast a relaxed, slightly stoned chemistry that draws listeners into their world without relying on gimmicks or trickery as their allure. The rock solid arrangement may run on too long, but the song has dynamics that hold listeners’ attention.

You may agree that they are “surfedelic garage-punk” or hear them as a guitar driven alternative act. Labels aren’t a concern. Tan Universe plays original songs that are familiar yet undefinable and this one, as those that came before, resonates as a narrative ripped from the pages of their everyday life. Such qualities make “Lil Cowgirl” essential listening.