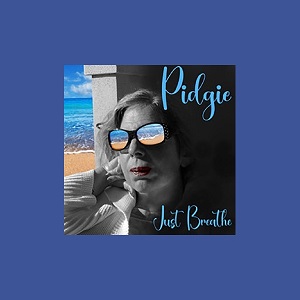 Just Breathe is the galvanizing new album from singer/songwriter and disability rights activist Pidgie. With themes of empowerment and creative perseverance Just Breathe is a breath of fresh air. Packed full of inspirational rock anthems and a dynamite cover of Nina Simone’s “I Wish I Knew How It Would Feel To Be Free,” Just Breathe has it all. Triumph over obstacles is not a foreign concept to Pidgie, which is what makes this album so wise. Pidgie was born with spinal muscular atrophy (SMA), grew up on either side of the Americans with Disabilities Act, formed an organization for student with disabilities at Hofstra University (where she graduated with a  bachelors degree), then went on to work in both the corporate and performing arts world. She’s a founding member of the Coalition for Disabled Musicians (CDM) and currently serves as its vice-president. Music has been with Pidgie through all of that, she has always sung and found joy in creative expression, something you can hear in Just Breathe.

From the moment opening track “Accessory” begins you can feel the power and charisma of Pidgie. She sings with feeling and an attitude that puts a smile on my face. “Accessory” tells the tale of a player who is stuck in his ways while Pidgie takes aim at him. My favorite lyric, that paints a picture of a man we’ve all encountered, is, “You change women like I change my shoes.” Pidgie reminds him that she was “his best accessory,” which can be interpreted however your heart desires. The theme of lost love, hurtful endings, and other relationship woes is one of the major topics Pidgie sings about. Whether she’s calling out at an ex in “Kick Ass Boots” or remarking on the beauty of love in “The Finest Gift,” Pidgie’s music is always relatable and honest. There is something innately relatable about Just Breathe that makes Pidgie’s artistry so palpable.

One of the most stand out traits of Just Breathe is the electric guitar. Since this is a rock album, it makes sense that the guitar would be prominent but man alive does Pidgie’s band get those guitars to sing and purr. Tracks like “All Revved Up” and “A Perfect Lie” celebrate the range of the guitar. Pidgie employs the use of distortion in “A Perfect Lie” making it an atmospheric and 90’s-esque romp. The haunting wails of the guitar follow Pidgie’s low vocals giving “A Perfect Lie” an air of attitude and melodrama. “All Revved Up” celebrates the lively nature of the guitar, often heard in classic Americana. The guitar riff in “All Revved Up” pumps you up immediately, its impossible to leave that song feeling lethargic. There is so much palpable joy and energy packed into this album that every song has the ability to leave you feeling a little lighter. Just Breathe highlights the magic of Pidgie’s delicate vocals and exciting raucous melodies.

The more I listened to Just Breathe the more a feeling of power and inspiration washed over me. Over the course of 12 tracks Pidgie reaches from her heart to yours, creating a listening experience not like any other. Even if she’s taking aim at an ex, what you feel connected to the most, is the power she is reclaiming in calling them out. In “The Finest Gift” Pidgie sings about  profundity of true love, you not only feel the triumph in her discovery but you also feel hope for yourself. The more that Pidgie bares her feelings, the more she inspires you. This effect happens rather effortlessly and speaks to the power and magic of Pidgie’s creativity. Empowerment is a coveted trait in life, Pidgie makes it feel accessible and possible for everyone.

Pidgie makes magic happen on her new album Just Breathe. Through powerful anthems on empowerment, triumph, and creative perseverance Just Breathe feeds on positivity and light. This is a magical album that will change you after you listen to it. Pidgie is only at the beginning of her musical career and I cannot wait to see where she decides to take us in the future. Her music is personal, palpable, and relatable. Pidgie continues to redefine boundaries for people with disabilities in her life and in her music, don’t miss Just Breathe out now!

The music of Pidgie has been heard all over the world in partnership with the radio plugging services offered by Musik and Film Radio Promotions Division.  Learn more https://musikandfilm.com