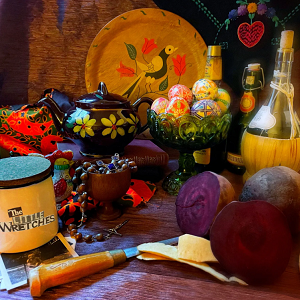 Pennsylvania’s Little Wretches has carved out a niche for themselves in the Americana/roots music community based on exceptional playing talents and idiosyncratic songwriting. The band’s 2020 album Undesirables and Anarchists racked up impressive sales, garnered critical praises from multiple outlets, and rode higher still thanks to its memorable single “The Ballad of Johnny Blowtorch”.

The band’s new collection Red Beets & Horseradish is a sprawling thirteen-song smorgasbord featuring ten songs alone from primary writer Robert Andrew Wagner’s pen. It’s far from a glorified solo vehicle, however. It opens with backing vocalist Jack Erdie’s songwriting contribution “Rise”, working in some traditional lyrics along the way. The song’s steady pace and the pleasing, unforced vocal harmonies are among the keys to the track’s success, but Erdie’s writing embraces fundamentals certain to satisfy many.

“Lovingkindness” has an ultimately hopeful message, but the amount of lyrical fire running through the verses may surprise some. Wagner has an outstanding observational eye and his penchant for significant detail is notable. It gains even more from his emphatic delivery. The harmonica leaps out because, in part, it carries much more of the song’s melody rather than serving as embellishment exclusively.

Wagner and company rock out with the album’s third track “Palms and Crosses”. “Rock out” should be qualified as Little Wretches focuses on groove and melody much more than empty six-string histrionics. The chorus hits with a wallop. “Nothing Was Given to Me” shows the band’s idiosyncratic nature in full flower. Spoken word delivery dominates much of the track and Wagner leads listeners through a narrative/character study projecting confidence at every turn. The band scatters brief passages of singing throughout the arrangement and their presence brings needed familiarity for some.

Little Wretches’ unique mix of seamless and slightly disjointed vocal harmonies is a hallmark of these songs and continues with the track “Heaven Was Open”. Harmonica makes its presence felt once again while Wagner and company explore solidly electric folk territory. The chorus and its payoff line are highlights once again. There’s a lot more going on than meets the eye with the lyrics for “It’s Raining” and the elegantly simple arrangement complements it wonderfully.

The band’s storytelling talents command the spotlight again with “Old Lillian’s Story”. It’s another theatrically inclined piece built on Wagner’s spoken-word vocals and the musical accompaniment is spartan. It doesn’t mean, however, that the music is an afterthought. Little Wretches handled the album’s production duties and they do a fantastic job capturing the song’s acoustic guitar.

They end the album with “It’s All Between Me and God”. Many listeners will rank this among Red Bets & Horseradish’s finest moments and it’s easy to hear why. The song is full-throated folk rock and boasts a well-rounded sound that never wavers, but the crowning touch comes from Wagner’s lyrics. He’s discovered his own twist on everyday language and imagery that freshens familiar tropes. It’s a rare gift and Red Beets & Horseradish may be the moment when that gift finds the audience it deserves.