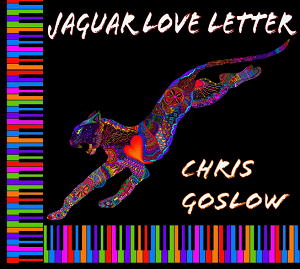 Instrumental albums are too often associated with pomp and elitism, when in fact they can be some of the most endearing listens a pop fan can stumble across. There are no synthetic hooks or rap verses to be found in the elegant Jaguar Love Letter from pianist Chris Goslow, and yet the warmth of his play in songs like “Strange Beauty,” “Life’s Great Mysteries,” “Magenta Sunset,” and “If I Only Knew Then What I Know Now” is as familiar as anything I’ve heard on the FM dial lately. Progressive in spots and remarkably isolating in others, Jaguar Love Letter is a spring soundtrack few music lovers are likely to disagree with.

The daring arrangements of “King Zealot” and “Our Little Secret” really stood out to me as a critic the first time I sat down with this tracklist, and while there are other instances of ambitiousness from this composer here, these two serve as the best excerpts in terms of ability. Goslow isn’t always boasting his complete talent in this piece; instead, he’s being a bit reserved when and where it works for his narrative, but you can tell just from the way he approaches this material that he’s a consummate professional.

Chris Goslow doesn’t fear rhythm as a means of expression in Jaguar Love Letter, but rather makes it a focal point of his efforts in the title track, as well as “Childhood Memories” and “Morning Will Come,” both of which feel just a bit more avant-garde than the rest of this content does. The funny thing is, even when this player is experimenting with his limits, as he does so efficiently in “Childhood Memories,” he never sounds like he’s searching for a centerpiece. He’s got good aesthetical foundations here, and anyone who gives this tracklist a peek is bound to share my sentiments.

Rather than trying to win us over one song at a time, there’s a desire on Goslow’s part to pull us closer to the source of the charm in this mix throughout Jaguar Love Letter, making every song feel like a chapter in a story rather than a specific, singled-out document. This is indeed a colorful tapestry he’s weaving as a statement of his artistry, but it’s not so eclectic in style that we’re unable to tell what his main drive is when he’s recording something original in the studio (a common problem I face among a lot of his rivals).

I might not have known much about Chris Goslow’s music before I listened to this album this May, but I can firmly say now that the buzz his new music has been attracting does not go without justification. Jaguar Love Letter is a dashing LP that doesn’t sound in love with its own shadow at all but instead feels like a record that leaves a lot of the typical thematic elements on the sideline before the music ever starts to play. Goslow makes it clear who he is as an artist in this album, and for that, I think he should get a lot of favor from critics.