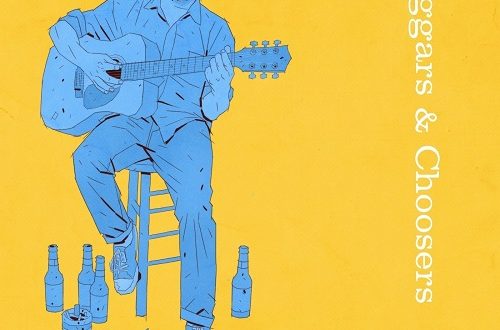 While one of the more deliberately paced numbers in the tracklist, the title song in David Sparrow’s new LP Beggars & Choosers is certainly one of the more urgent compositions included in the album. Sparrow has a restrained adrenaline here that is almost as brooding as his lyrics are, and although his emotion is presented quite thoroughly through the verses, there’s something so much more profound about his tone that I can’t help but focus on when I listen to this song. It’s a similar story with the gentle rock piece “So Long” and folky “Lost in the Past,” and throughout Beggars & Choosers, I think he makes it a point to balance his expression evenly between music and lyrics the same.

“Dreams” feels a lot more retro in style than the almost jazz-like “Sorry Heart” or the outtake “Mean Jean” do, but all three of these tracks definitely give us different sides of one cohesive story. I like that David Sparrow is able to spread a narrative across multiple movements in this tracklist as opposed to working on different themes from one song to the next, as it really does emphasize how much of a big picture artist he is whether he’s composing or executing in front of the microphone. There’s never a dull moment on his end in “Rescue Me” or the prickly “Give Me Some Truth” because of his assertiveness, and when listening to Beggars & Choosers in its entirety, kinship in this material becomes all the harder to ignore.

I was immediately taken with this record after listening to the opening song “Kim,” and while it borrows a page from a somewhat dated alternative country concept, it doesn’t sound rooted in the past any more than the aesthetical foundations of an Americana-tinged “Back in the Old Days” do. Contrast is less in the spotlight here than straightforwardness is, which is really saying a lot when taking into account how diverse an attack Sparrow can unleash no matter the kind of tale he’s weaving together with his lyrics. He’s got an untapped duality that I would like to hear him experiment with a little bit more in the future, but right now I think his humble attitude is a big part of what sells Beggars & Choosers as an authentic listen from beginning to end.

Tracks like “Changing Your Ways” and “On My Side” bid us hello with an indie rock enthusiasm that I would’ve enjoyed a bit more of in this LP, but in general I don’t know that there’s a better crossover alternative Americana record generating buzz this spring than this one. David Sparrow has a lot of low-profile sensibilities that could relegate his output to the college radio market responsible for keeping a lot of indie aesthetics alive in the 2020s, but there’s nothing here that tells me he doesn’t want this future for himself. He’s confident in his delivery, and it’s his swagger that overwhelmingly makes Beggars & Choosers such a fun listen every time I sit down with it.