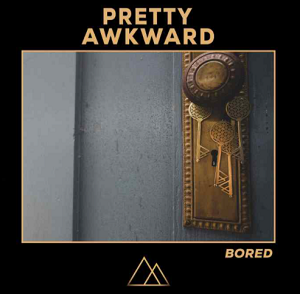 Those who would tell you rock doesn’t work with the sleek pop hooks it used to in modern times just weren’t expecting a band like Pretty Awkward to debut in the last year, and with their new single “Bored,” the group puts an exclamation point on their meteoric rise to the spotlight. In “Bored,” Pretty Awkward go deeper with their lyrics and lighter with their harmonies, striking a confluence of passion and hesitant grooves that are uniquely their own, despite the familiarity of the song’s tone. They’re developing a special place among their peers, and to me, they’ve earned a lot of credibility with this crucial addition to their catalogue.

I really like the spirit of the video’s narrative, and while I don’t think it’s entirely independent from that of the song itself, there’s an element of contextualization that comes exclusively with watching the imagery here. The lyrics imply a lot of self-awareness, but the video itself feels more like a commentary than it does anything even remotely introspective. This is an instance of becoming so personal that relatability is impossible to evade – as though the song is at once cut off from the world and in the center of its most violent occurrences, if you will.

Though I would have liked just a little more attention afforded to the string parts in “Bored,” I can understand why Pretty Awkward wanted to go with something minimalistic instead. There’s certainly plenty of guitar worship on the market already, and by putting so much more of the weight on the vocal – which is ironically one of the most subtle elements of the entire song – it makes it possible for us to understand the power of its melodicism with nothing to get in between artist and audience. That’s masterclass-caliber work, and I don’t think any critics would argue with me.

The vocal is achingly understated throughout the whole of this single, but this is the only way it’s able to emphasize the emotion in the lyrics here to the degree that it does. Everything counts in a pop composition constructed like this one; from the delivery of a verse to the beats that adorn the backdrop and how they’re paced against the singing, and I think it’s very obvious just how seriously Pretty Awkward take even the most minute of intricacies within their sound. This is carefully crafted to stoke a reaction, and in my experience, it gets one every time.

“Bored” is an excellent new single and music video that I have some good feelings about at the moment, but more than its commercial potential, I think it’s further proof of how authentic a sound and style Pretty Awkward have. They’ve been taking their time getting ready to release their debut album, but at this point, I don’t see any reason to wait any longer. This group has the chops and the technique to go places, and with the return of live music I believe they’ll be able to ascend through the ranks a lot faster than anyone would expect.