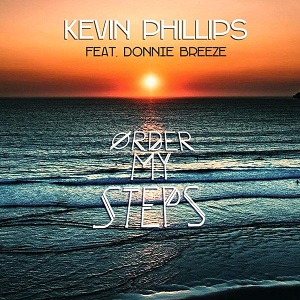 A life in the streets. A humbling experience. A moment of clarity. The story of redemption is one that has been told many times and many ways over the course of mankind’s existence, and in the new music video for his single “Order My Steps,” Kevin Phillips does his best to retell it through a distinctly gospel-tinged lens. The results of this experiment, brought to us with the assistance of rapper Donnie Breeze, are absolutely spectacular if getting after a soulful harmony is as important to you as feeling the inspiration of a warm verse, and this season, I think that applies to a lot more of us than usual.

Though there’s a heady gospel element to the lyrics in this track, the concept for the narrative and the way the hook has been laid out in this composition could be called secular R&B at its best. There’s nothing artificial or even slightly phony about the way the melodic drawl we get from Phillips makes merry with the gentle strut of the percussion in the backdrop. Breeze’s relaxed rap caresses the melody instead of cutting through it, and at times the entire performance feels too intimate to have been recorded in a conventional studio environment.

I wasn’t aware of either player in this song or its music video before getting into “Order My Steps” a couple of weeks ago, but I’m definitely going to be keeping both of them on my radar and looking out for more beats like this sooner than later. Kevin Phillips is a boss on lead vocals in this track while Donnie Breeze gives us a guest appearance that actually lives up to what a collaborative role should be in 2020 (but rarely actually is), and though they’re new faces to me, I see a lot of potential for mainstream growth in the near future.