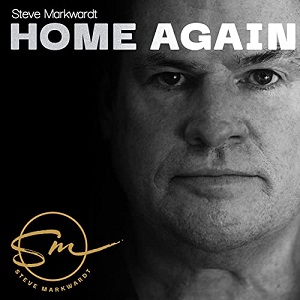 “Rear View Mirror” is the latest song from country crooner Steve Markwardt. They sure don’t make ‘em like Markwardt anymore – a standup kind-of guy that slings his guitar and sings from the heart. This impressive sounding track, one with a catchy hook and brazen guitar riffs is about as good as it gets when it comes to meshing classic country with some modern twists. If you’re a fan of country music, you will be a fan of Steve Markwardt.

It’s hard to believe that it’s only been since 2016 that Markwardt has been playing the guitar. A gift from his wife, the former front man for a Frank Sinatra-style band called Langton Center Big Band (part of Texas’ Tarleton State University), cruised through instrument and hasn’t put it down since. His songwriting skills, just as impressive, are tight and focused on radio friendly tunes. “Rear View Mirror” is from Markwardt’s Home Again album. The collection includes the worth-checking out “I Forgot To Tell My Memory To Forget” and “Headin’ back to Texas”. It’s clear that Markwardt has branded his style of country in the sways of Texas swing, Fort Worth fun and American grit.

Markwardt starts the song out with the chorus – I’ll see you in my rear view mirror, I haven’t left yet, but I may as well be gone. As you get smaller, my tomorrow’s getting clearer, I’ll see you in my rear view mirror, he sings. It’s as if he’s brought the live stage show to the studio. His voice is confident and so at-home behind the microphone. You can tell his years as the lead singer of a band served him well. I like how he has a softness to his voice, a thread of natural harmonies that weaves through the tenor. He has a restless and rustic tone in the guitar that when it collides with this voice, it’s as if the rancher in all of us feels the need to split town, reach for the stars. I’m not saying it’s an inspiring song and one that will be your daily affirmation, I’m saying it’s the type of song to get that adrenaline percolating just enough to dance. And maybe, it’s the right tempo change your mind about that person in your life that’s holding you back. Who knows, maybe it’s you holding yourself back.

The way the drum kicks and hits, all is right. It’s as if it’s Markwardt’s beating heart – never skipping a beat and only looking forward and into the future. He’s on a different path in life now and emotional distant, too. I liked how the overall music bed flaunts a honky tonk sound, and has some rolling harmonies.

I imagine this song getting many spins at the local country bar, and especially a country dance venue. It’s refreshingly authentic and has this sheen of a man that life’s patina might be a little copper, but he’s fleecing gold from it. “Rear View Mirror” is an excellent song, and I’m excited to hear what comes next from Markwardt.