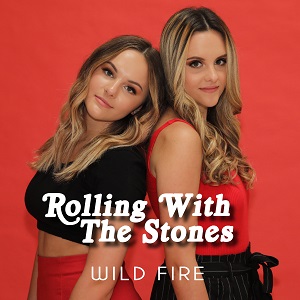 Rolling With the Stones by country-pop duo Wild Fire

In their new single “Rolling With the Stones,” country-pop duo Wild Fire continue to develop their sharp tandem vocal attack with larger than life harmonies that could make anyone into a fan of modern Americana. “Rolling With the Stones” has all the cosmetics of a true pop song; a big hook, an easygoing groove and a pair of singers in Wild Fire that can crush just about any verse they get their hands on, but the mechanics of the track have a lot more in common with vintage country music than they do anything else. There are a lot of layers to peel back in this act’s sound, but no matter how you take their music – or which genre you choose to classify it as – there’s no getting around the simple fact that they’ve got more talent than most anyone in their peer group at the moment.

Everything in this song revolves around preserving the authenticity of the harmony, which most straight-pop artists would definitely take issue with right out of the gate. There’s often no room in the mix for eliminating the artificialities that come with propping up skyscraper-sized hook when it comes to making conventional pop music, but that’s where Wild Fire’s country ethic comes into play. They’re going out of their way to make sure there’s a little bit of a swing to their shared vocal delivery, and within the substance of the harmony itself we find a lot of unrefined, humble tonality that lets us know we’re listening to something real and tangible. It’s not CMT Nashville, but rather a more virginal era of the country genre they’re drawing inspiration from here.

Even with its subtle bassline being factored in to the equation, the groove in this track is definitely heavy enough to get us moving to the beat steadily from the get-go. I’m not one hundred percent certain, but if I were to make an educated guess, I’d say that Wild Fire wanted to make a point of demonstrating how little they need to depend on external resources when crafting something original in the studio with “Rolling With the Stones.” The irony comes in the form of the lyrical content, which alludes to pop culture in the bluntest of fashions, amidst a backdrop that is clearly born of something removed from cosmopolitan artistry altogether.

Texas is always producing new talent, no matter what genre of music we’re discussing, but when it comes to country and its many factions, its latest export in Wild Fire prove that the state isn’t losing its touch by any means. This has been a really intriguing time for country, and specifically for country-pop crossover artists, but in “Rolling With the Stones,” I think we can hear shades of a newly evolved sound coming from these two that will be more than worth following-up with in the future. They’ve still got plenty of room to keep growing, but as of this moment, they’re on my top indie country acts to watch.