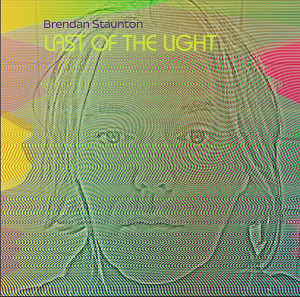 “Last of the Light” (LP) by Brendan Staunton

Coming into focus through thick, surreal haze, “We Don’t Talk About It” ushers us into the arms of a tender string melody that will soon be joined by Brendan Staunton. In this first track off of his debut solo album, Last of the Light, Staunton makes it clear exactly what kind of a singer/songwriter he wants to be, and it’s one that any fan of indie folk-rock should be intrigued by this season. Harmonies are as big a force for expression as the words and grooves they’re joined by in tracks like this one, “Mean to You” and “River” are, and even when he directs our attention towards one element in the music over another, there’s never a moment in which he sounds scattered or unsure of himself here.

“Stop Believing” slides out of the darkness with a casual beat, eventually gripping us with its dynamic use of texture amidst a rather straightforward lyrical structure. The verses themselves are plenty colorful and definitely have a personal feel to them but, as is the case with “Smiled” as well, Staunton’s interplay with the instrumentation feels like the biggest point of interest here. You don’t have to be a professional music critic to recognize how passionate this man is about his work, as he takes advantage of almost every opportunity to exhibit his love for the craft in Last of the Light. His words often embody the mood of the melodies instead of the other way around, further alluding to deeper narratives that take more than a couple of listens to fully grasp and appreciate.

In “Nine Day Wonder,” Brendan Staunton picks up the pace tremendously from where we leave off in “Smiled,” but the swinging groove in this track is unquestionably one of the most memorable of the entire album. “A Moment” gets us back into the slinking adult contemporary folk-rock that defined “River” and “Smiled” earlier on in the tracklist, but with a far more mature (and sensuous) bassline in the mix. The guitar solo at first feels like a cross between an SRV B-side and Michio Kurihara’s handiwork in the Boris deep cut “You Laughed Like a Watermark,” but when it’s given a little more room to breathe against the backdrop, it opens up and delivers an evocative chill that almost equals that of the bass element in the forefront of the track. This is an interestingly multilayered song, but far from the only one of its kind on the record.

“Underwater” keeps the instrumentation-heavy theme of Last of the Light’s latter half going strong with some of the more psychedelic-style folk on the whole of the album before delivering us into the electropop of “A Girl,” the closing song on the record. After taking a close look at all of the material presented to us here, I must say that it’s impossible to describe Brendan Staunton as being a non-experimentalist in any capacity. He’s created an alternative to the mainstream model here, and I can’t wait to hear what he’s going to come up with next.

User Rating: Be the first one !
Share
Previous Rolling With the Stones by country-pop duo Wild Fire
Next Round Eye is back with new Single/Video/LP