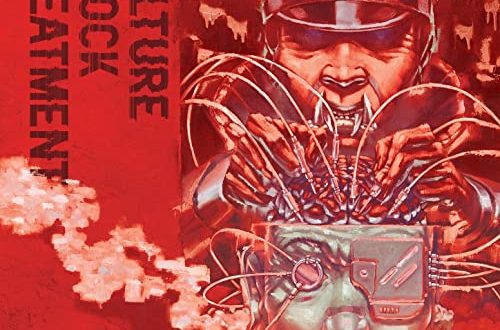 Round Eye is back with new Single/Video/LP

Roaring out of the ethers with an anger that will continue to swell for the next forty minutes, Culture Shock Treatment’s opening cut – its title track – doesn’t waste our time with a big, bombastic intro before getting right into the ferociousness of Round Eye’s one of a kind punk rock. Better referred to as an experimental strain of vicious alternative riffing, the style of play that Round Eye employ is yours to categorize (as a critic, I think it would be a bit too time-consuming), but what’s undebatable is this band’s attention to detail in the aforementioned song and its fourteen successors in the tracklist of Culture Shock Treatment. This is rock for a new generation of angst-ridden youth, and it’s ready to blow the paint off your walls the moment you press play.

“Smokestack” immediately follows the title track with even more of a kick than its predecessor has to offer, and in the music video for the song, we learn why this band has taken off in China as much as they have in the last few years. Their message of breaking away from the oppression of communism is impossible to distort in this track, as is the general sense of rebellion that comes in “Magaman,” “5000 Years,” “The Foreigner” and “Armadillo Man,” which each throw different layers of smoke in our direction – all connected by a cutthroat volatility that seems to come at us in powerful waves. Mike Watt produced this album, and even at a distance, his influence over the brawniness of the material is unmistakable.

“Circumstances” is unbelievably conventional compared to the slow-rolling “Red Crimes,” and yet the two couldn’t have made for much better neighbors in this album. “Catatonic (I’m Not a Communist)” draws some inspiration from The Ramones before turning us over to the unforgettable freak-out “An Opportunity of a Lifetime,” which features a chilling spoken word element that literally left me shaken in my initial listening session with the song. We feel the tension building as we descend into the clutches of another groove-centric tune in “Pieces,” its oddball cousin “Uomo Moderno” and the single “Guess Who’s Coming to Dinner,” but in all honesty, what Round Eye have planned for the finale here is hard to predict no matter which track you start with.

“You’re so Fucking Cool” pummels us with its punishing riffs in one final sonic show of strength, and in its wake, the speakers are filled with a fuzz from “Endless Sleep” that, at first, made me wonder if Matt Pike was sitting in as a guest player here. In the murky noise that pushes this track into the air around us, we come to the end of Culture Shock Treatment, but the narrative of the album (both aural and poetic alike) takes a bit longer to sink in than the forty minutes these songs collectively last. Round Eye deliver a rebel yell for the ages in this highly-anticipated third LP, and from where I sit, it’s a breakthrough for both their moniker and the underground Shanghai scene they represent.

User Rating: Be the first one !
Share
Previous “Last of the Light” (LP) by Brendan Staunton
Next “Get the Funk” by Billy Ray Rock