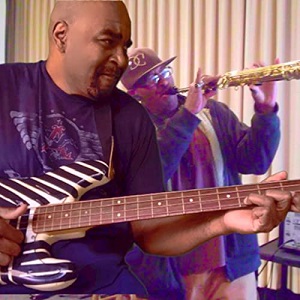 “Get the Funk” by Billy Ray Rock

A giant bassline, the kind that could start an earthquake at the right volume, is waiting to greet us in the opening salvo that starts up “Get the Funk,” Billy Ray Rock’s new single, but its indulgent swing is just a small sampling of what’s to come in the next few minutes this song lasts. “Get the Funk” is everything its title suggests it could be and more – steeped in the retro swagger of a bygone era but loaded with enough of a cosmopolitan melody to make it appealing to millennials, this track aims to please the masses this summer. Billy Ray Rock isn’t a household name, but here, he’s rolling like a player who has been on top of the game for some time now.

Instrumentation is the cornerstone of any good song, and this is all the more true of a moderate jam like “Get the Funk.” With Billy Ray Rock’s vocal duties reserved to the ridges that fall between the immense breakdowns, there’s a lot to be interpreted from the texture and tonality of this track – arguably as much as there is from the lyrics themselves. It isn’t common for contemporary R&B to drift into atmospheric territory, and though this artist is stopping far short of the over the top surrealism that some of his indie brethren have been welcoming into the scene with open arms, he isn’t shying away from cerebral concepts that let him get a little wild with elements like the bassline.

As far as its production quality is concerned, “Get the Funk” has a conservative varnish more akin to a rough-cut mixtape than anything in the radio-ready world, but this is part of the reason why it’s such a seductive number. Billy Ray Rock doesn’t feel the need to put up a lot of fanciful colors in the mix here – outside of the instrumentation and his powerful vocal, of course – but rather depends on his talents and that of his fellow players to make a point about their collective skill. That puts him in the company of some serious names in this genre, some of whom have become just as influential over other dimensions of R&B, hip-hop and pop as they are to an artist like this one.

“Get the Funk” never slows down for a second, and it concludes much as it begins; in a whirlwind of harmonies that make us want to play the song all over again. Billy Ray Rock has been putting out content like it’s going out of style since 2019, and judging from the ambitiousness of this most recent studio offering, I don’t think we’ve seen the last of him by a long shot. He has a talent that he isn’t about to squander away – whether it be in the studio or out on the stage somewhere in a town near you, this is the guy you want to go see if you’re in need of some primetime funk in the year 2020.