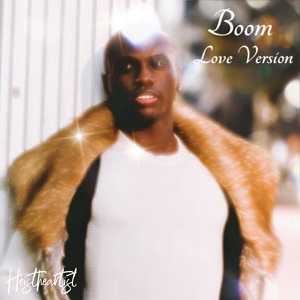 Rising from the shadows with a piano’s bittersweet harmony to lead the way, HeIsTheArtist’s “Boom – Love Version” gets us rolling with a sultry instrumental introduction that instantly gives us a sneak preview into the charisma that is about to unfold in the next three and a half minutes of play. Even before HeIsTheArtist has begun to serenade us with his soul-influenced voice and gospel-inspired lyrical content, there’s a sense of calm and serene unguardedness that fills the air around our speakers, swelling with every passing moment. “Boom – Love Version” is a multidimensional melodic wonder, but for as complicated and evocative as it feels at times, its structure is actually quite simple – and built upon the natural talent of this amazingly gifted singer.

“Boom – Love Version” sees HeIsTheArtist finally getting into the mix around the thirty second mark in the song, and the tension that was created before his arrival is immediately snatched up and employed in his delicate dispersing of lyrics. He’s got a lot of romance in his voice, but there’s an overarching element of kinship and familial love that overshadows everything about the tone he’s utilizing in his delivery. HeIsTheArtist is a man driven by faith perhaps even more than he is the desire to make a hit single, but as surprising as this might come to some in the music industry, the former isn’t preventing him from attaining the end result of the latter by any means at all in this brand new single.

The beat does a lot to amplify the emotionality of the verses here, but honestly, I think you could strip away all of this instrumentation and still have something pretty awesome in “Boom – Love Version” – so long as you keep the lead vocal perfectly intact. With a voice as powerful as his is, even at moderate to minimized volumes (as is the case with this particular release), it could be even more engaging to place him before a silent backdrop, so we can really hear what he can do when there’s nothing to get in his way. HeIsTheArtist has plenty of time to cover that ground; at this present moment, he’s introducing himself to the audience without overstating a specific theme, and in gospel and soul alike, that’s worth applauding in itself.

HeIsTheArtist comes to the conclusion of “Boom – Love Version” with his voice commanding over the instrumentation, suddenly fading into the silence from which the track came bursting through some 3:20 earlier. I’ve listened to this single multiple times since first getting ahold of my own copy this past week, and though the beat has become familiar, the actual melodic fabric of the instrumentation – and the vocal harmonies, for that matter – never seems to get old. This guy has so much talent going to the right parts of his sound here, and though “Boom – Love Version” isn’t the only star in his growing discography, I would currently rank it as the best and most accessible track he’s released to date.