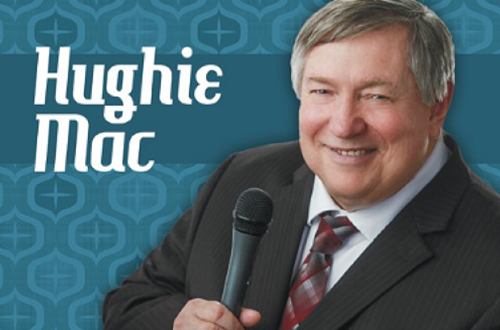 Just like we yearn for home when we need comforting, or have a taste for chicken noodle soup when we don’t feel our best, gravitating towards songs that ‘just get us’ and change our moods is part of human nature. Right? We all have that tape we wore out in the 80s or the iTunes (back when it was called that) playlist we play over and over. It’s artists like Hughie Mac that keeps these legendary songs at the forefront. Always churning out recordings, Mac continues moving forward with songs that always seem to pause things when life is happening in his latest collection, Hughie Mac Sings Some Great Songs Part 4.

Listeners won’t have a chance to stop and smell the roses, but they will have many opportunities to slow dance and reminisce in Mac’s 23-track assemblage. Like many of Mac’s previous albums, he sticks to a lot of Frank Sinatra songs, but covers several genres including country music’s Glen Campbell and big-band era’s Duke Ellington. Mac, a Philadelphian, even takes on the island sound of Jimmy Buffett. Romantic and energetic, Mac’s crooning vocals mesmerize over the preferred piano bed tracks.

Mac’s many years of performing in a variety of restaurant settings give him the natural charm and gregarious magnetism for songs like “Glory Of Love”. Originally recorded in 1936 by Benny Goodman, audiences might also recall Bette Midler’s character in the movie Beaches making the song popular again in 1988. Mac’s rendition is smooth and throws off yesteryear vibes. His voice, as in all the songs on the album, has a jolly nature, with just a hint of gravel.

Another highlight on this album is the high flying horn section in “Nothing But The Best”. Sounding bigger than life and dress to the nines, Mac’s voice travels in first class when he sings I like to eat lobster directly from Maine / I like to see bullfights in sunny old Spain / I’m gonna start living / you want and see / nothing by the best is for good enough for me. He has glee and giddiness when he sings in this one, and you can just tell he’s smiling behind the ivory keys loving recording this song.

With so many choices, it’s hard to whittle down my favorites, but I have to add another Sinatra tune, “All the Way”. Mac’s piano layers itself over a longing flute and clarinet and his voice just floats like a careless raft down a peaceful stream. He sings who knows where the road will lead us / only a fool would say / but if you’ll let me love you/ it’s for sure I’m gonna love you / all the way / all the way. It’s a picturesque moment and I envisioned my own 60s era movie in the making, with Mac’s voice narrating.

Mac’s command of the Sinatra songbook is impressive, but it’s important to note that he also gives the same careful performances in songs like “Cheeseburger in Paradise” and the nostalgic “Don’t Get Around Much Anymore”. That’s Mac, he’s nostalgic and a real treat.