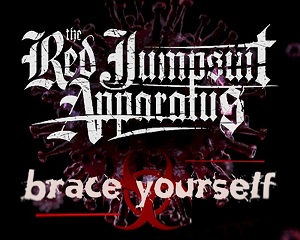 A groove has the power to shape an entire song. From the mood to the very tone in which it’s delivered, the beat plays a role in making the new single from The Red Jumpsuit Apparatus, “Brace Yourself,” as beastly as it can be, and I must say, it’s quite the monster even at moderate volumes. Moody and yet deeply melodic but not at all a departure from the sound fans know and love them for, The Red Jumpsuit Apparatus’ “Brace Yourself” comes in heavy and doesn’t stop pummeling us with intense waves of bass, guitar and drum destruction until we’re completely vulnerable to its humanizing lyrics. There’s something to be said about angst-ridden music in the year 2020; even with the volatility of modern times being taken into consideration, a track like this one seems to take all of the pent up frustrations and fear collectively experienced by a society and put them into palatable rhythm, rhyme and harmony we can all understand to some degree. Say what you will of the genre’s present state, but this song is one fine contribution to the war on underwhelming rock.

We find the lyrics in “Brace Yourself” trapped by the bass and drums perfectly in the mix, with the vocal conveying them acting as a buffer between the beefier elements here. This is absolutely one of the more meticulous rock arrangements I’ve had the chance of listening to this July, and comparative to the other mainstream outfits in my scope that have a billion-plus streams, these guys aren’t acting very cocky in their performance at all.

True, there’s a decent amount of swagger in their execution – especially with the guitar parts, which sail out of the speakers and into the air around us like daggers administered from a stealthy ninja in the night – but it never boils over into arrogance. It’s hard for me to imagine a group of rockstars that haven’t got a little full of themselves over the course of a successful, nearly two decades-long campaign, but all the same, it would appear that The Red Jumpsuit Apparatus are in fact those very rockstars.

2020 has been a good year for rock on some many different levels, and when you count the new record The Emergency EP from The Red Jumpsuit Apparatus in, there’s really no debating whether or not there’s something for every taste out right now. In “Brace Yourself,” it definitely feels like this band is getting ready to embark on a new chapter in their long and storied career together, but I don’t think that hardcore disciples need to be getting nervous about what the future is going to present them with in RJSA’s sound.

They’re simmering in something both familiar and frontier-blazing in this piece, and from the looks of their ambitiousness this summer, I would say that we should expect The Emergency EP to usher in not only a new era for their music, but for the culture it has come to represent these days.