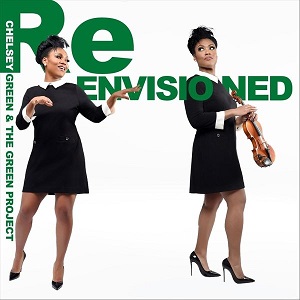 Giving it their all, Chelsey Green and The Green Project are right on ‘time’ in the new four track EP ReEnvisioned. To simply categorize their sound as smooth jazz doesn’t paint the entire picture. This band is checks many different boxes, including classical, soul, funk and pop. Chelsey Green’s commanding performances are just the tip of the iceberg for this exciting group.

From the nostalgic “Fly Me To the Moon” (featuring Sean Jones) to the instrumental “Soundcheck”, ReEnvisioned takes the listener on a collectively enjoyable sonic journey. Chelsey Green, who earned her Doctor of Musical Arts degree from University of Maryland College Park, has been an Associate Professor in the String Department at Berklee College of Music since 2017. She’s originally from Houston, Texas. The scrumptious violin string additions to the songs on this EP really provided a whole other path of experience and connection.

In “Fly Me To The Moon”, Chelsey Green’s breathy, romantic toned vocals take on the Frank Sinatra classic with such grace. The tempo is a bit slower than Sinatra’s 1964 rendition, but it conveys the same spirit and lofty emotion. Fill my heart with song, let me sing for ever more, you are all I long for, all I worship and adore, in other words, please be true, Chelsea Green swoons. She adds extra suave and passion at the end of each line; it’s as if each last word gets extra icing on the cake.

The song “Time” has glorious drum cymbals. The violin strings are nearly haunting, almost chasing the listener like the seconds on a clock can’t be escaped. The truth comes to light in time, Chelsea Green sings. Later, her words how can I compete with something I never beat, calls to the listener. Is she saying these words because she doesn’t know who her love is cheating on her with? How does one beat an opponent if they don’t know who that opponent really is? Perhaps she is saying that her lover is the game’s opposing force she can never best him. I thought her vocal delivery was much more vulnerable in this track (compared to “Fly Me To The Moon”). She shows the listener a much deeper side to her, and while she lets loose, she still contains herself to the betrayed and heartbreak that can be heard in each note. The bass line and the ‘funk’ part to this song is very subtle, it moves the song along and gives it the rhythms.

“Soundcheck” and “It’s Not What It Seems” are both instrumental tracks. The violin is generous in both songs, and it’s so captivating. The texturing of the strings over the jazz percussion and piano feels like a rapture. In “Soundcheck” the drums are sticky; the sweet violin alongside the instrumentation feels warm and bright. In “It’s Not What It Seems” the violin is again bright, but in an almost autumn-ember sort of coloring.

The music of CHELSEY GREEN has been heard all over the world in partnership with the radio plugging services offered by Musik and Film Radio Promotions Division.  Learn more https://musikandfilm.com