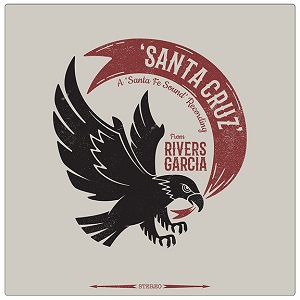 Canadian born Rivers Garcia developed a passion for music early in life and it remains an abiding influence on everything he does. His recent musical turn resulting in this album release Santa Cruz emerged from a recurring ten-year trek through the American Southwest. His journeys allowed him to acquaint himself with the flavors and sounds of American life in a manner no book or film can capture.

It is a solo album in the purest sense of the word. Garcia plays every instrument on the release and his wide-ranging command as a player marks him as a musician of prodigious talents. The foundation of the album’s songwriting is built from poems and road journals Garcia maintained during his travels. The literary qualities of Garcia’s lyrical content match up well with the rock, blues, and country Americana themes of his music.

The opener “Drive” is an outstanding beginning. There are various strands tying this track together, but the predominant musical mood is acoustic singer/songwriter. Despite this sound guiding the cut, there are strong rock and blues influences shaping its sonic architecture. The harmonica in the song’s second half strikes a soulful note and fiery lead guitar near the end punctuates the performance.

“Mustang Blues”, based on title alone, promises a blast of bluesy goodness. Garcia subverts expectations with another mid-tempo track constructed along acoustic lines with biting flourishes of electric guitar erupting at intermittent points. Garcia’s voice has a light touch and his talents for arranging vocals stands out. The bright gait of the track “Stick Shift” has a brisk pace. Its exuberant mood contrasts notably with Garcia’s vocal style. However, he brings a tangible amount of energy to his performance that compliments the song.

Garcia and his acoustic guitar carry “Palm Trees, West L.A.”. The unadorned emotional and musical trajectory of the performance will impress many listeners. He has an exquisite touch with the instrument that is far from rudimentary and brings a lyrical character to the songwriting. The penchant for beautiful vocal arrangements continues with the album’s title track. It is another mid-tempo amble with an emphasis on acoustic instruments though Garcia laces the track with tasteful electric guitar. It is one of the finest moments on the release and Garcia places it at a prime spot in the track listing.

There is a darker edge defining the penultimate track “Ideology” and the accompanying electric guitar passages accentuate its intense demeanor. Garcia delivers his vocal performance with the same understated passion heard in the earlier tracks, but it reaches a new zenith with this track. The final song “California” is a melting pot of different sounds. The seven-minute long cut begins with an extended electric guitar introduction rife with distortion before it breaks into Garcia’s customary acoustic artistry.

It is the crowning touch on a release worthy of anyone’s time. There is a personal tone running through Santa Cruz’s dozen songs distinguishing it from many performers and songwriters alike. It never comes off heavy-handed or pretentious. Rivers Garcia, instead, realizes his artistic vision in memorable fashion and Santa Cruz stands as one of 2020’s most satisfying releases.