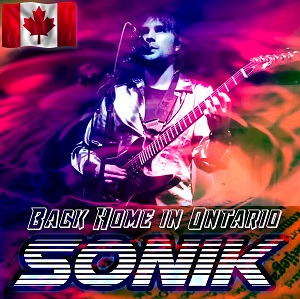 SONIK “Back Home in Ontario” (feat. The Sonic Memes) (SINGLE)

It all starts with the beckoning of the acoustic guitar, and before we know it, SONIK’s “Back Home in Ontario” has launched into a galloping rhythm that could pull us down with it at the right volume. Intensity is the name of the game for this performance, but that doesn’t mean that surgical precision isn’t demanded of the players in The Sonic Memes, who put as much sweat and blood into the core of this composition as the man of the hour does on his own. SONIK is living by the rock n’ roll rulebook in this single, and despite taking a page from the iconic rockers of yore, he sounds like a true original in every sense as he works his way through the verses of “Back Home in Ontario.”

There’s something to be said about the instrumental punch that this single is packing, but we first must start off with the tonal integrity of the vocal here. It’s true that there are a lot of different ways to make a good rock song, but when you’ve got a voice as smooth and integrated with the guitars as SONIK’s is, it makes using the conventional blueprints make a lot of sense. There’s pop in this performance, but it’s not glistening with polish in the mix at all – it’s a part of what the composition is to begin with, rather than an added feature created from the producer’s chair behind the board.

The Sonic Memes go to work pretty hard in this single, but they’re not overstepping their spot in the big picture at all, even though it wouldn’t be hard for them to. There’s a lot of rhythm in the melodic output as well as the percussion and the bassline, which makes every beat seem that much bigger than the one to have come before it. To SONIK’s credit, he’s able to keep up with a mountain of musicality coming up behind him without ever sounding like he needs a boost from something synthesized and otherwise outside of the traditional rock realm. His heart and the lyrics he sings might be rooted in the present, but his attitude itself is something akin to what I would expect from a singer and songwriter with at least a couple of decades’ worth of experience under their belt.

To put it as simply as possible, SONIK’s “Back Home in Ontario” is everything the true hard rock fan needs inside of a quick lightning bolt of a performance, and as far as debuts go, it’s one of the better listens I’ve had land on my desk this year. There’s no pressure to sound like someone else, no flashiness getting in the way of understanding the real artistic substance in the song; there’s just SONIK, The Sonic Memes, and everything they audiologically stand for as a band. That’s what rock needs more of in an era like this one, and both hardcore and passive fans of the genre will agree when they hear this track for themselves.