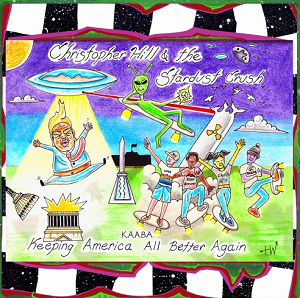 “Squatters’ Rights” from Christopher Hill and the Stardust Crush

“Squatters’ Rights” from Christopher Hill and the Stardust Crush is a peculiar trip through pop art and electronica. Self-described as ‘death-folk-rock’ “Squatter’s Rights” plants it unforgettable imprint into the listener’s brain from the first dissonant note. Wildly and strangely unnerving, the song carries the listener into Hill’s poetic and dreamy landscape. The future is now; the time is now to be concerned. While the world might seem like alien to many, “Squatter’s Rights” upends the need for political change.

Scattered into “Squatter’s Rights” are Hill’s prose. Hill, who goes by the pronouns they/them, sings I got squatter’s rights and creates an impressionable, albeit, enigmatic flurry of lines. Beautiful chocolate/laughing children at the end they sing. Hill’s voice is ever-changing, hitting some high notes and staying in the steady range, too. The music bed underneath is what gives “Squatter’s Rights” such a jab at the current administration. It goes from quirky to science fiction to nuclear in various steps. The song, like a countdown, ebbs and flows the listener between this audacious psychedelic to an ambient atmospheric dream. My sense of gravity and balance was topsy turvy; low and behold, I loved it.

The music bed climbs, reaches and hits some climatic moments. A cascading piano, shimmering its way in a positive, but uncertain way. That’s one thing about this tune that Hill really communicates: uncertainty. An underlying fear is prevalent. Hill captures a confined chaos (like a dumpster fire). The anger in the vocals is subdued, and other times manic, but always channeled into music. On the first listen, it’s as if all the sounds under the kitchen sink is thrown into the mix, but Hill maintains a solid track after a few listens. It takes a bit of patience and letting go the need for a formal structure to find the song’s magic, but it’s in there. Drift off into this melting pot of sounds and let yourself go.

Hill also reminds listeners to look in the mirror. If things don’t change, we’ll be looking at the nuclear blues. (They) create a sound that echoes The Doors’ “The End”, well, towards the end of the song. Off in the distance, a haunting silence from the destruction. Hill bends sounds, stretches guitars. It’s mind melting. It’s not Apocalypse Now– level gripping, but it’s very close. the guitar really molds itself around the shell of the song, bites back, and then concaves in-and-out. It’s some of the most interesting guitar tones and textures I’ve heard in a very long time. Trippy, and hard to describe, but take my word for it – this song is definitely a worthy escape.

“Squatter’s Rights” is from the album, Keeping American All Better Better Again. If the goal is to wake people up and save them through music, Christopher Hill and the Stardust Crush have taken one giant leap for the rest of us. “Squatter’s Rights” is on solid ground, and takes a bit of patience to get rolling. But, once you’re fastened in tightly in the captain’s chair, this song is an eclectic, immersive sonic experience.