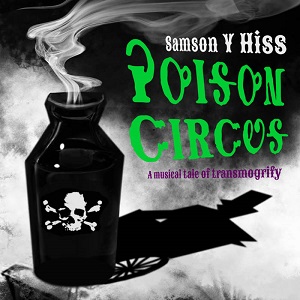 In a creepy, uncomfortably discordant melody that seems to have been sourced from beneath hell’s big top, “Prologue to Poison” slithers out from behind a rock of silence and introduces us to the twisted world of tones and textures that will become Samson Y Hiss’ new album Poison Circus. If you Google Hiss’ name, expect to find a picture of a maniacal, fairly-deranged looking clown looking on through saturated colors – an image that seems to come alive as we listen to the opening bars of this first track of the record bearing his professional moniker.

From the scattered melody of this song, we segue directly into the faint screech and staggered drumbeat of “Runaway,” the macabre balladry of “Maggot of Mine,” synthetic joy of “Entrance of the Test Subjects” and, frankly, downright devilishness of the self-explanatory and surprisingly melodic “The Ringmaster.” The ground is starting to crumble beneath the feet of the players and listeners alike by the time “Russian Strong-arm Race” sonically stumbles to its place in the tracklist – recalling the ironic, tongue-in-cheek drone of the last two minutes in QOTSA’s seminal Rated R album, I might add – but once we’re this deep into Poison Circus, trying to step back from the utter absurdity of the music proves difficult for those with a high sonic intellect (for reasons, I might add, I’ll probably never understand).

Saccharinely fizzy at its onset and then needlessly gloomy in what I can only assume was an attempt on Hiss’ part to make sure we’re still gripping the edge of our seats, “Energy Drink” is every bit the unsettling ballad you’d think it would be just by looking at its name. “Consorting the Waltz” follows a similarly formulaic trail into the neo-electronic glare of “A SSShow of Hand(s),” “A Call for Help” and “Train Go Round” as though these tracks – and even “Musicians-Hitting Bottles” – are but a segue into the extended final act we’ll be forced to wander through to see the light of day once more.

The funhouse gets darker, stranger and even harder to keep up with on the poetic front in the neon sludge of “Hair is for Hanging,” startling and operatic “Mutating, Morphing, Transmogrifying” and overture of “Take Two,” but if you’re listening closely enough, you’re probably already entranced by the lone point of consistency this record has to boast; a vicious sense of impending doom, which, in my estimation, gets harder to evade by “Prelude to Poison.”

Just when you think things couldn’t get any weirder for Samson Y Hiss and his unnamed but beautifully talented vocal counterpart in Poison Circus, the intentionally off-center “A Duet: Shadow of Mine” bludgeons anyone within earshot with a harmony as hellish as it is oddly heroic and slightly punkish in certain spots. After being informed that this freakish affair is coming to an end and moving onto the next town by a random janitor, “Entrance of the Freak Show” shows us to the tent’s exit, and at once, it’s all over. The colors running into each other, the horrific painted-grins implied by every cheaply-faceted melody – if there was ever an LP that left me genuinely upset, uneasy and unclear on what I had just listened to yet still very intrigued by the layers of experimentation comprising its core, it is Poison Circus.

Not for the faint of heart, this could be the most unique go-to album for Halloween buffs since Flight of the Behemoth, and if I were the only critic to say so, I would be shocked beyond belief.