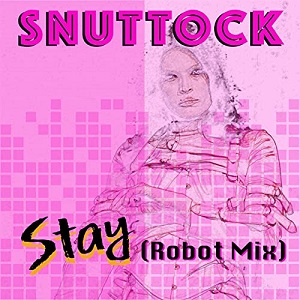 If you keep up with the American underground, you’re probably already aware that synthpop’s big comeback has been well under way for the last few years, and the success of duos like Snuttock is perhaps exemplary of this fact. In their latest single “Stay (Robot Mix),” Snuttock continue to expand their exploration of vintage synthpop tones with increased industrial and post-punk edge, alluding to gothic undertones in their songwriting that could be experimented with even more than they have been thus far. “Stay (Robot Mix)” isn’t as brutish as it is born of a space age-like balladry, but it nonetheless leaves one heck of a mark if listened to in a vulnerable state of mind.

There’s definitely some pretty strong Britpop influences in this single, but I don’t think I would call the track wholly retro. The electronica element in the hook is what centers “Stay (Robot Mix)” and relegates its alternative frills from the core of its actual aesthetics, and while it’s a bit jagged for the softness of the melodies it’s designed to support, it gets the point across that Snuttock aren’t trying to be another hybrid indie act. That’s becoming less and less charming with each passing year, and I like that they’re doing their own thing with this release instead.

The music video for “Stay (Robot Mix)” pays a strange homage to vaporwave, new wave revival and even some of the wittier EDM experimentations I can recall reviewing towards the end of the 2000’s, but with Snuttock contributing a crucial surrealism to the visuals that wouldn’t have made sense 13 years ago at all. Theirs is a certainly an artsy approach to making a brooding pop song, but I can’t say that it doesn’t give them a unique profile to boast above their peers in and out of the underground in 2021.

This lead vocal is so strikingly fragile at some of the track’s biggest moments that it has successfully swept me away with its melody every time I’ve listened to “Stay (Robot Mix)” in the past week. There’s reflectiveness that is only touched on through the tonality of the singing, not the lyrics themselves, and it makes me wonder what Snuttock could accomplish in a purely instrumental setting free of the constraints created by the pop format in general. An ambient record from these two could be a watershed, or at the very least a means of gaining better insight into their capacity for evolving and developing deeply psychedelic music in the future.

Snuttock issue a boundary-pushing single that is going to have critics and listeners buzzing alike this winter in “Stay (Robot Mix),” and while its video is a document I wouldn’t recommend ignoring, the song is what I believe to be the real treasure to behold right now. There have been scores of bands and solo artists developing music around a similar set of ideals as this pair have been in the last two years, but with 18 years of experience behind their momentum, I think Snuttock can be trusted by all to offer some of the most mature and provocative content around on every occasion they’re afforded.