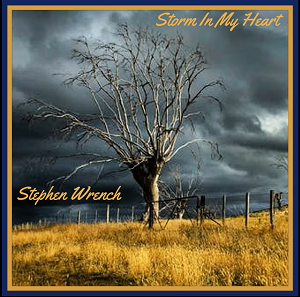 Stephen Wrench’s single “Storm in My Heart” is an unabashed love song. It’s more evidence of Wrench’s deep connection to the muse in an over forty-year music career. He’s worked in virtually every capacity within the music world, among them tour manager, performer, and songwriter, and has relationships of varying depth, length, and reason with a who’s who of modern music. Wrench has worked with luminaries as diverse as Lynyrd Skynyrd drummer Artemis Pyle, Tommy Tutone, Molly Hatchet, Grand Funk Railroad, and ABBA, among many others. His experience on both sides of the equation, as a performer and behind the scenes string-puller promoting the work of others, uniquely qualifies him to assess what audiences want.

They want a condensed musical experience that doesn’t take on more than it can handle. “Storm in My Heart” is a model of that ideal as the three minutes and change running time is a perfect fit for the song. Anyone coming to this song hoping to hear experimentation or envelope-pushing will be disappointed. Wrench’s songwriting embraces time-honored virtues of construction and its spot-on execution never sounds by the numbers. This is impressive considering its traditionalist slant.

Wrench’s lyrics do a fantastic job of straddling the line between everyday sentiment and flashes of poetry. Each line has the same chiseled focus heard in the musical arrangement. Experienced music fans may find that the words, especially their rhymes, are predictable, but pleasingly. They have the feeling of inevitability rather than cliché as if they are already written and Wrench plucks them from the ether.

His lead vocal has a gravitas that gives the song added impact. Wrench’s canny singing conveys a wealth of emotion and confidence in the same breath and the conviction in his voice helps sell the song. The smattering of backing vocals running under his own is not a constant presence but has a profound effect on the final product. The female voice plays off well against Wrench’s.

The focus is on fundamentals like crafting a memorable chorus. It succeeds on that score. Individual instrumental performances are strong across the board during “Storm in My Heart”, but spotlight moments are scant. This is a track where the musicians serve the song first and foremost; any other considerations are secondary if considered at all. The slide guitar included in the song, however, is an exception. It definitely deepens its bluesy feel and its emotive qualities make it a natural fit for the ballad form.

“Storm in My Heart” is the latest entry in a career far from finished. There’s no doubt that Stephen Wrench is what they call a “lifer” and shows no signs of waning powers. If anything. Wrench sounds every bit as connected with his art as performers decades younger. His obvious passion for songwriting and performing comes through in every second of this single. It is a masterclass in how to write music with substance that has mass-market accessibility and is unquestionably entertaining.