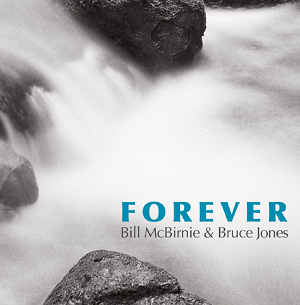 Forever is a seven song collaboration between award-winning flutist Bill McBirnie and singer/songwriter Bruce Jones. Several impressive achievements mark McBirnie’s career but perhaps the most notable are winning all three of the National Flute Association’s competitions in the Soloist, Masterclass, and Big Band categories. Iconic flutist Sir James Galway has picked McBirnie to be his resident Jazz Flute Specialist. His Latin influences are apparent throughout the album as well.

It is far from a collaboration in name only. Bruce Jones shares co-production duties with McBirnie and he penned each of Forever’s seven songs. It starts with the instrumental “Criole Blessing (Saravá Criola)”. His flute and alto flute carries the song’s wealth of melodies and Jones’ simmering percussion underpins their exploratory bent. Any first-time listener dreading bloodless smooth jazz will be relieved. This track alone makes it clear McBirnie and Jones have zero interest in writing and performing disposable music.

Jones and McBirnie duel musically during the second track “Song for Svetlana (Um Choro Para Svetlana)”. The former’s acoustic guitar is lower in the mix than McBirnie’s flute, but they trade lines, particularly in the song’s second half, that cast a melodic spell. It has a much more relaxed mood than the opener. Forever’s title track is another melodic peak for the album. It has the same light percussion heard during “Song for Svetlana” and a level of sophistication that wouldn’t sound out of place on a top-shelf pop song.

“Dreams and Light (Canta Canção)” has more diffuse qualities than earlier tracks. It is a little longer than the duo’s average fare and audibly stretches out without overextending itself. Developing the melodic ideas over a longer duration doesn’t backfire on the duo as their talent for shaping and resolving melodies remains intact.

The bonus track “Full Moon, Blue Wolf (Lua Cheia Lobo Azul)” is the only song with a vocal released from this album. Bruce Jones doesn’t have blow you away pipes, but he’s an ideal fit for the material. His voice fills the song with a meditative, studied presence. It’s another song with light commercial leanings. It’s true of the collection that its melodies may appeal to those who wouldn’t usually consider listening to flute or jazz-influenced music. Including a lone vocal track never feels like a token addition.

It is the latest in an impressive string of releases from the Extreme Flute imprimatur. McBirnie has several prior recordings under different names and with assorted collaborators, but Forever reaches the same high standards of its predecessors. His long-standing chemistry with songwriter, vocalist, and multi-instrumentalist Bruce Jones continues to pay enormous creative dividends. They show no signs of slowing down.

Their joint production rejects any gimmicks and concentrates on fundamentals. There is excellent separation between instruments and the recording has clarity throughout. Each of the album’s seven tracks embodies McBirnie and Jones’ dedication and passion for their craft, but the compositions are accessible and personable. Their release Forever is for any music fan who appreciates a challenging and pleasing listening experience.

User Rating: Be the first one !
Share
Previous Stephen Wrench “Storm in My Heart” (SINGLE)
Next LELE