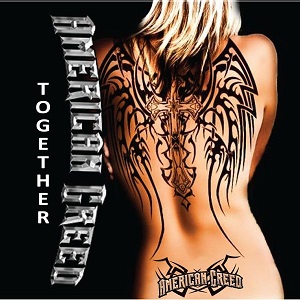 “Together” (SINGLE) from American Greed

You’ll easily find yourself humming along to the new track “Together” from rockers American Greed. Not quite a ballad, but not quite a head-banger, the adrenaline is contained in this melodic rock offering. Bolstered by awesome backing harmonies, lead singer Dave Farver delivers an impressive array of octaves and emotions in this enjoyable outing. Fans of pop rock and straight-up rock and roll will love “Together”.

Besides Farver, American Greed is comprised of drummer Michael Mesey (he also penned “Together”), Matt Arana on lead guitar and Bob Guion on bass guitar. It’s worth noting that Mesey is the former drummer to rock and roll icon, Chuck Berry. The American Greed press materials state that Mesey was actually picked personally by Berry to be his drummer for special shows. This talented, rousing band has a way of conveying a live, in-person experience into the studio. You feel the energy; the band’s synergy is highly evident. You can tell this band has been performing together for a long time and is made up of seasoned musicians. It’s not clear from the press materials who’s playing the piano that is featured near the song’s end, though. It’s gorgeous. I loved the piano’s soothing tone.

I just want to hear you say we’ll be together, we will be together, Farver sings. How can I find the way to heal some of the sorrows for you the time I was away, Farver continues. I can surmise that this song is about a journeyman, a road warrior like most musicians trying hard to come to grips with missing so much back at home. They are away from home and trying to maintain a relationship – the love and honesty flowing from Farver and Mesey’s words is palpable. You feel not only the genuine love, but the sincerity. He’s singing from his heart. I think this song has bounds of relatability. The deliberate drumming is fantastically steady, as is the melodic guitar. As mentioned before the faint piano closing out the song is stirring and in my mind, maybe represents an even deeper emotion from the male perspective. It fades way into the night, maybe representing regret.

He’s not crying, but the beauty of the piano captures his internal pain. His heart bleeds. You can almost imagine him singing of missing those little daily moments, even helping with errands, as he pains over the ways he wasn’t at his love’s side. It’s so endearing. Depending on your mood, it might also be quite sad. “Together” has an array of emotions. I found myself really seeing this couple in my mind; I envisioned the family they’ve created enduring these moments and moving closer together.

After a few listens, “Together” struck me as a song that Bon Jovi fans will adore. It has the makings of all the classic rock sounds, but fuses in Americana folk rock.  I also think fans of Daughtry will especially like this rock song. “Together” is a fantastic track.

The music of American Greed has been heard all over the world in partnership with the radio plugging services offered by Musik and Film Radio Promotions Division.  Learn more https://musikandfilm.com