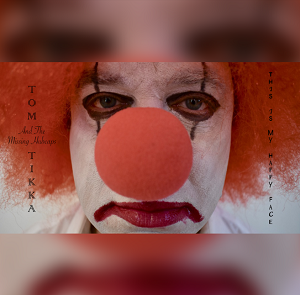 Tom Tikka and the Missing “This Is My Happy Face” (SINGLE)

Tom Tikka and the Missing Hubcaps are building a reputation as among the most daring veins working in a rock vein today. Chaining them to that style, however, is a mistake. Listen to Tikka and the band’s latest album This Is My Happy Face and you’ll hear several aural strands woven into its tapestry. He threads those assorted threads with a deft and confident hand.

He likewise keeps you coming back, song after song, despite picking death as the album’s overarching subject. Initially inspired by a television program about psychic mediums, This Is My Happy Face deals specifically with life after death but listening to these songs never feels like rolling a boulder uphill. Its ten songs are rarely longer than average rock tracks and Tikka’s skills for construction realize their dramatic potential.

“Bullet in the Head” legitimizes Tikka and the band’s rock credentials. Some listeners might long for a little more heft from the drum sound, but the playing is beyond reproach. This is percussion that understands how an unerring and authoritative tone is an essential ingredient for any convincing rock track. The rhythm section finds an impressive groove throughout the entirety of the cut while keeping things fluid and pliable.

“Heart’s On Fire” is one of the more commercially promising songs on the album. A defining strength of the collection is its utter lack of self-indulgence which, given the subject matter driving the songs, is doubly impressive. The synthesizers and guitar are at a full-on charge for much of the track but there’s always a sense of control guiding the song. Tikka’s songwriting rarely pursues a single line of attack for long and this is no exception.

Anyone who has ever felt wronged in love will like “Doormat”. The term is, of course, familiar to any adult and the musical accompaniment, especially its acoustic beginnings, possess a stronger singer/songwriter quality than any other album track. It’s an one-sided story, naturally, all such songs are – as a result, it is much more insular than other songs on This Is My Happy Face. “(I Wish I Could) Fly to the Moon” is bursting with melodic gifts. His talent for song construction is apparent here as well, the transitions from verse to chorus are handled with confidence, and the vocal phrasing is note perfect. The rhythmic “sliding” quality of the latter will be satisfying for many listeners.

“Hunger Lines” is one of the album’s songs that balances two worlds. There’s the bent in Tikka’s character for surprising his listeners, and the side of his identity that has long since mastered the fundamentals and understands how to use them for maximum effect. His “lighter” inclinations blend well with his desire and the band’s ability to rock out with muscular energy. They build up quite a head of steam during this track.

The title song is another of the album’s finest moments. Positioned where it is, near the end, implies that Tikka and his band mates want this to be a big moment, a climatic statement that lodges in listener’s memories. There are always several “movements” in Tikka’s songs and much of their merit comes from how well these passages complement one another. By that measure, the title track is an enormous success. This is My Happy Face, on the whole, is a stunner that demands multiple listens before you fully digest its contents.