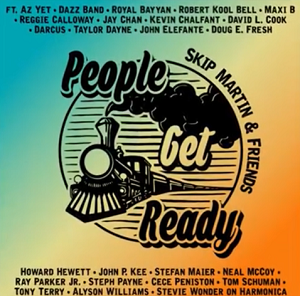 “People Get Ready” isn’t a new song, but when you listen to the Skip Martin collaboration out now that is benefiting the St. Jude’s Children’s Research Hospital – a sense of anew and contentment fills the air. Grammy winning singer and musician, Martin, holds court amongst a who’s who of artists extraordinaire. If you recall the legendary song, “We Are The World”, you will then too understand the tones and the specialness “People Get Ready” brings to the present. From Stevie Wonder to Ray Parker, Jr., to CeCe Peniston, the love and passion these artists bring to “People Get Ready” is astounding.

Picking up passengers coast to coast, faith is the key, open the doors and board ‘em, sing the various voices. Given the context of this song, originally composed by Curtis Mayfield, and later becoming a frequent song during the American Civil Rights movement, and additionally covered by Bob Dylan, Rod Stewart & Jeff Beck and others, it’s clear why Martin recruited his famous friends to spread such a timeless message. The last year (what feels like longer) has been a brutal reminder of the pain and heartlessness in the world. It’s also seen more love and more progress in many arenas in life that history can’t compare. When you hear the words sung in “People Get Ready” it becomes a calling, an anthem for all peoples. When you also know that Martin’s name is attached (Martin is a member of The Dazz Band and Kool & The Gang) you know you’re going to get a solid gold finish with funk, soul and jazz all rolled into one. You get that, plus a healthy dose of gospel.

I wish I were clever enough to discern who sings which line, who plays each specific note, but it’s clear they all worked together. I don’t think having the vocals and instrumentation patched together without them all being in the same studio is a detriment – you can hardly tell. It all feels so natural and exciting. The shimmering piano, the angelic voices lift the listener higher, and higher. The undertow of this song isn’t just music, it’s years and generations of built up love. One would have to be very cynical to feel darkness or despair after experiencing this song. If Martin’s goal was to have each listener feel a calmness, a collective sigh of relief and a huge imaginary hug from this song, I think he’s accomplished his mission. It’s the ideal blend of vintage and modern rhythmic energies.

“People Get Ready” is in rare company. This song and the artists involved, give their all and frankly, it’s the perfect choice to empower a cause such as St. Jude’s Children’s Research Hospital. It’s a giving song on many levels, but most of all, it gives the listener a wonderful feeling. To listen to “People Get Ready” is to burst with thoughtfulness. As they say, sharing is caring, and I’m pleased to share my opinion that “People Get Ready” is a definite hit for all music lovers.

The music of Skip Martin has been heard all over the world in partnership with the radio plugging services offered by Musik and Film Radio Promotions Division.  Learn more https://musikandfilm.com