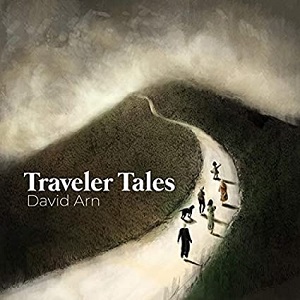 Traveler Tales from David Arn yarns together 14 different paths, 14 different emotions. From the opening folk gem “We’re Not Broken: The Lover’s Tale” to the beautiful “Mother’s Day: The Mother’s Tale” and to the closing “When It’s Over: The Ex-Lover’s Tale” Arn, along with some special guests, weaves together chapters and landmarks that are completely relatable. A true wordsmith and story collector, Arn is a commendable force the folk and Americana world, as he sprinkles in memorable characters and haunting melodies at each step. Traveler Tales is worth the journey.

Arn, who is based in Virginia, casts a wide variety of tones and textures in these 14 tracks. For the sake of the review, I’m going to spotlight three of my favorite tracks. It’s worth noting, though, that the daunting task of picking just four came down to a nail biter. I think fans of Bob Dylan and John Prine will be in agreement that Arn’s lyrical talents are phenomenal.

We’re not broken, only shattered, sings Arn in “We’re Not Broken: The Lover’s Tale”. His voice, soaked in whiskey or bourbon, take your pick. He sounds like he’s been singing in that intimate corner bar for decades, his voice taking on the years of the smokers who blow their plumes of smoke in his direction. He’s taken on the cloak of a smoker, but he’s also observed their faults and their triumphs. Such is the tone of his work, a life-lived and a singer who’s deliver is crisp, albeit, weathered. The undercurrent of a faint, but full sound fills the spaces. A haunting collection of voices The demeanor is almost cold, winter-like.

In track two, “Fallen Bird: The Beggar’s Tale” Arn sings we’ve been dragging our feet, slowing our feelings down. A steady-griping guitar flows, opening into a solid melodic track. Just a slight twang and roots rock riff here and there. My heart is begging, he sings. This song opened up a more lofty tone – Arn’s voice softer, and almost echoes of George Harrison. This is an outstanding song.

The song “Mother’s Day – The Mother’s Tale” featuring Ava Hart is deserving of all the buzz it’ receiving. Hart’s angelic voice, emotionally gripping, is genuine love. The song, about a mother’s love for her autistic child, possesses tender moments. The stirring music bed, like a slow dance, flows like ribbons underneath lines like little one let me rock your soul….never gonna say, if only, never gonna say, if only. This is her way of communicating with her child. It’s breathtakingly beautiful. When Hart sings ‘if only’ I wondered for a moment, if there was regret. I don’t think so. I think this mother wouldn’t change a thing.

My final standout, “St. Paul’s Chimes: The Bystander’s Tale” has Arn sounding more like a crooner. He’s more confident, rock and roll sounding. We touched for a second, I craved a thousand seconds more, he sings, a meandering violin string underneath his voice. Where the tired past is supposed to lay, he sings. This song makes you feel connected to your past, and he connects the listener to the swelling rock guitar. It’s wonderful.