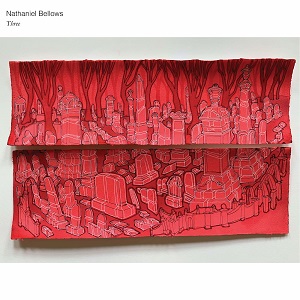 Nathaniel Bellows’ latest effort is the deceptively simple titled Three, arguably a continuation in the vein of previous works The Old Illusions and Swan and Wolf respectively. A constant in both popular and indie music is the deconstruction of stereotypes and typical attributes when it comes to image, Bellows proving no exception to this new norm. In the case of male artists, the idea of introducing the vulnerable and the personable into previously steely, machismo public profiles has taken up varying genres by storm, the only differentiation boiling down to quality.

Bellows, an accomplished writer and poet in addition to musician, belongs in the latter. With Three, he lyrically contrasts gritty, traditionalist masculinity with surprisingly raw, emotional depth. Key examples on the album include the songs ‘In the Wool’ and ‘Move Away’ respectively. Lyrics such as Come make me from a strand into a string, something made for covering to Aim away from here, only a fool would stay if just to leave for free…Can I say this, take all we saved as kids… perfectly express said qualities, in the process making Bellows an intimidating male figure that is simultaneously accessible.

The music seems to compliment Bellows’ overall aesthetic, not just creatively but personally. All three albums presently released under his name are self-distributed, and reportedly were conceived during a time of intense family turmoil and loss. Bellows’ known personal tragedies add a further wrinkle to the music, made all the more evocative by the simplicity of its arrangements. Many tracks boast little more than guitars and a keyboards – Bellows’ rugged yet soulful vocals the real star of the show. Bellows also seems to draw on his strengths in the literary field. His songs prove not only musically entrancing, but collectively stimulating due to the stories they tell in vivid detail. Such musical storytelling is rare these days, particularly given the demand for fast-paced, slickly-made entertainment – bringing to mind retrospectively the work of a Tom Waits or Bob Dylan.

Putting the shiny soullessness of popular music to shame, the track names alone to each of Bellows’ songs are indicative of the quirky, ingenious, and unique approach he brings to each piece. Highlights include ‘I Once Did’, ‘I’ve Learned’, and ‘Move Away’, each profound in their ruminations with a belying, matter-of-fact articulation. This is also reflected in the listener’s experience upon hearing the album in full. While each song carries a varying tinge of the melancholic, none ever overwhelm. Bellows approaches each piece with an upbeat tempo and ironic enthusiasm, even during the record’s darker, more introspective moments. This is also reflected in each song’s musical arrangements. Whereas ‘In the Wool’ consists mainly of Bellows’ vocals assisted by guitar and keyboard, other tracks such as ‘Move Away’ are enhanced by a broad, orchestral sweep during the chorus. This in turn enables there to be some distance for the listener, Bellows proving a master at knowing when to immerse, then to relieve…