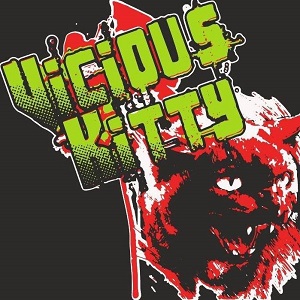 Vicious Kitty, a Washington-based hard rock band, has released a new version of their song “No More Waitin’,” which was originally recorded on their self-titled EP from 2018. Full of invigorating power and musical prowess, “No More Waitin’ (Remix)” is a force to be reckoned with. It’s the kind of song you want to hear at a show, and the kind of song you drum along to on your steering wheel. It gets you excited, makes you feel something. Even if heavy loud rock music isn’t your cup of tea, there’s something uplifting about “No More Waitin’ (Remix)” that could get almost anyone listening along.

Vicious Kitty is made up of three musical veterans:  Matt Tantrum, Jimmy St. Bitchin, and Tony Terlicker. On their own, each one of these guys is talented, and together they create something special. They let their passion for music come through in every second of their songs. “No More Waitin’ (Remix)” is a conglomerate of rock/punk and a bit of 70’s metal, but they’ve managed to make it sound like it belongs in the present. They’ve taken the things they love and emulate and morphed it into their own sound.

The band used the forced down time from the pandemic to work on polishing their upcoming album, set to release sometime in Spring 2022. All that extra practice brought them to a whole new level. While Covid made performing live difficult, Vicious Kitty is making music that belongs on a stage. It’s full of attitude and fun, on top of talent. They are planning on releasing a few more singles and a new music video before the album, and if the other songs sound as fantastic as “No More Waitin’ (Remix),” I think there will be a much larger crowd waiting in anticipation for this album.

Vicious Kitty has shown what dedication and self-improvement can do. By not being afraid to keep working on and re-record their own music, they’ve given their music a new form. While their EP version of “No More Waitin’” is still awesome, this fresh take kicks it up another notch. Vicious Kitty wants to show they are still kicking and still excited to make music and share it with the world at large. Sometimes the best way to do that is to simply let your talents speak for themselves, and I believe they’ve managed to do that. There’s something about the harmonized vocals and catchy lyrics put up against the wonderfully composed music that hits the spot. It’s something that would fit in on the radio, on a party or workout playlist, and definitely in a festival line-up.

I’m curious to see how the next chapter of Vicious Kitty unfolds following “No More Waitin’ (Remix).” I hope their next few singles and their new album holds just as much vigor and life. I want to see this kind of music capturing people again, making them dance their frustration out, and appreciate the beauty of loud, hard, rock n’ roll.