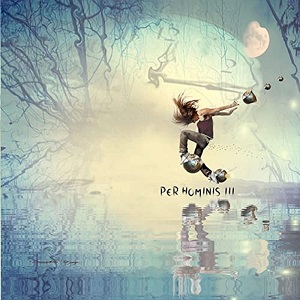 When rock singer Amy Lee of Evanescence first came out on the radio waves back in the late 1990s, it was like hearing the voice of an enchanting fairy. Who was this woman, this ethereal singer that is fueled by multi-octave injections? Cut to now, and the song “Regeden” by Switzerland singer/songwriter extraordinaire, Johanna Rittiner Sermier. That same glass-like, icy tones fused with unbridled operatic tenor, well, it’s something to behold.

“Regeden”, a single from Sermier’s album Per Hominis III, is sung in English. Her voice, almost regal in nature, shines when it’s accompanied by the guitar work. The song has both acoustic guitar and electric guitar arrangements – switching off at the song’s bridge. The tempo of “Regeden” starts out medium, with a nice, easy groove. The vibe starts out like something is about to happen, the story is building. The guitar strings pick up, and Sermier’s voice follows suit. She cries out, she sings with such devotion and dramatism that you can’t help but feel moved. As aforementioned, I hadn’t felt this starstruck, so in awe, since Amy Lee. Lee might have more rock tenor in her voice, but Sermier certainly eclipses Lee in terms of range and charisma (which I didn’t think possible).

What else tilts the scales in “Regeden’s” favor? Besides the tone and Sermier’s fantastic voice, I would have to say that this song’s theme is interesting. It’s a page turner. I’m not going to be too specific with lyrics here, as that doesn’t always matter. I don’t think you take this song literally – I think Sermier’s intent is to cast a wide net of emotions and storylines and leave it to the listener to take what they feel is necessary. I believe this song is about coming out of depression and being ‘you’ again. I think it’s about returning to normalcy, coming out of the dark. I felt like the beginning acoustic guitar represented ‘before’ depression, and the faster, more frantic electric guitar replicated ‘during’ depression. She’s aching, her voice yearns for so much more. You can almost touch that emotion. It’s not like she’s yelling or distraught like purgatory. I felt like she rode the roller coaster. I do think, and maybe this is Sermier’s greatest triumph, is that she finds peace. Her inspiring trek unfolds before our ears and she’s gracious enough to share it with her listener. That’s what I think anyway. The song could be about something completely different.

I was just as surprised as you to be listening to “Regeden”. I can be a fickle listener. Some days I’m in the mood for fun, silly and pop flavors. Other days, and maybe this week, I lean towards songs that let me move my focus onto my mental health or inner strength. “Regeden” is something that I didn’t think I needed, and it ended up being what I most wanted. The heart wants what the heart wants and the mind wants what the mind wants. Where will “Regeden” take your mind?