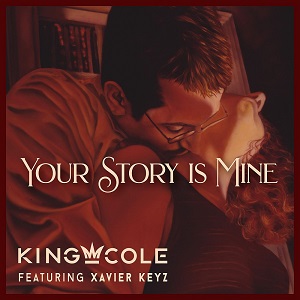 King Cole “Your Story Is Mine” (SINGLE)

The life and times of one Andrew “King” Cole are virtually cinematic in scale and scope. His music career spans nearly six decades, and he has packed at least twice that into a truly incredible life. Cole, who lifted his stage name from the most likely source, Nat King Cole, has been making music since the latter half of the 20th century. His road has taken him from D.C. to New York to Los Angeles, and an integral part of his story has taken place in all three. While his tale is less cautionary than sensational, Cole’s wisdom is now the synesthesia to his art.

King Cole’s newest single, “Your Story Is Mine,” can allude to several interpretations, but most will presume the one of overarching empathy. One seems justified in assuming that King Cole intended no ambiguity when it came to the title. Amazingly, Cole may have succeeded in summarizing his entire career to this point, with one song. Listening to the tune, and watching the video, which is available on YouTube, I experienced shades of Johnny Cash’s 2003 cover of Nine Inch Nails’, “Hurt.” After a seemingly unrealistic journey, King Cole has arrived at a place of acceptance, and subsequently, reciprocity.

“Your Story Is Mine,” has a bit of a throwback feel. It harkens to the glory days of the 1970s and artists like Marvin Gaye and Isaac Hayes. King Cole enlisted the vocal talents of Xavier Keyz, and the two exude a deep, soulful chemistry. The overall audio texture of “Your Story Is Mine” is smooth as silk, with thought-provoking and meaningful lyrics. “So we’re thinking about/how to figure it out/but the future is shrouded.”

Cole spares no expense when it comes to the production of his records. The liner notes of “Your Story Is Mine” is as lengthy as the credits of a full-length motion picture. King Cole is wise and experienced enough to realize that studio perfection is imperative, and everyone’s efforts, pay off in a big way, here. In previous statements and interviews, King Cole has admitted that he often seeks out the same collaborators, as a source of trust and familiarity. Consistency is key for Cole and he is careful to surround himself with those who fully comprehend his vision and tendencies.

King Cole has gone on record, in saying that “Your Story Is Mine,” was inspired by his relationship with his wife. Throughout all of his trials and tribulations, including recurring battles with addiction, his wife has been the one constant in his life.

He cites how couples are eternally intertwined as it relates to their life paths, merging to become one. It would be easy to simplify “Your Story Is Mine,” as a love song, but there’s something about it that feels much more existential. For one Andrew “King” Cole it’s the distance and miles that truly count. The old adage is that man plans, and God laughs. As so many of us have envisioned our lives, before they were actually lived, King Cole never let disappointment get in the way of a good story.