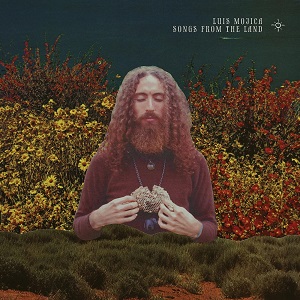 Some people, even those who know better, roll their eyes when they hear the term “folk music”. It doesn’t refer to indigenous music from different cultures but, instead, the zeitgeist’s image of the stereotypical folky with an acoustic guitar warbling some interminable version of “Pretty Polly” with an optional harmonica holder.

There’s no worries about that with Luis Mojica. Residing in upstate New York with his wife and daughter, he is a practitioner of holistic health, running a business in this vein as well.  Centeredness pervades the entirety of his third album Songs from the Land, an abiding fidelity to places in the human heart life cannot scathe, Even in its darkest moments, even in its darkest moments.

“Darkest”, however, may be a little strong. Melancholy is a more fitting description for the collection and it is apparent from the first track, “Northbound”, that a certain wistfulness infiltrates every second of his work. Light percussion supports the recurring skeletal melody and Mojica carefully modulates the delicacy, reinforcing the arrangement at key points, maintaining consistency throughout.

“Colonized” has a much fuller melody. It pairs electric and acoustic guitar together at the beginning before incorporating more and more percussion as the cut progresses. Mojica’s voice has much more outright spirit here than the opener. Handclaps are a novel touch in 2021 and Mojica never emphasizes them; they further humanize the moment without ever striking listeners as overly dramatic.

The album’s third song, “All In Awe”, revisits the gossamer-like quality of the earlier “Northbound”. Mojica delves even deeper, however, this time and conjures an undefinable hybrid of a straightforward folk song adorned with a smattering of ornate instrumental flourishes. It has an ethereal slant lacking in the earlier tracks. Some of the best songs included on this release are its shorter efforts. “Strange Disease” begins with another minimal arrangement, structured around a melody sketched out just enough for the listener, but Mojica complements it with well-placed percussion.

“Call In” is another exceptional song. Mojica’s songs have a pastoral quality, never ham-fisted or cliched, but lush despite their stripped-down arrangements. It is the warmth in the instruments, the all-encompassing effect of the production, creating that lush aural sensation. The mix of concrete details and generalities in his words hits assorted high points during this collection and this one shouldn’t be overlooked. “Pine Child” has a loose-limbed gait, is relaxed, and follows the same path for the bulk of the song. Songs from the Land has a handful of strengths working in its favor, but one that listeners may miss are the vocal arrangements. The second half of “Pine Child” will capture the attention of anyone who values inventive multi-part harmonies.

The brief “Black Bear” continues exploring themes present throughout the album and acts as a sparkling coda for the release. “Black Magick”, its predecessor and the release’s penultimate cut, is the true finale for Songs from the Land. He lights out for longer territory here than other tracks on the album’s second half and there’s a good reason why. This expanded canvas and its placement near its conclusion is a conscious move. The music has a haunted candlelit air and, once again, the vocals are superb and often layered. This is an album capable of entertaining many, there’s no question, but it’s likewise a collection worth study. Songs from the Land is musical art and Luis Mojica should be proud.

User Rating: Be the first one !
Share
Previous King Cole “Your Story Is Mine” (SINGLE)
Next Once Great Escape “Even The Undertaker” (LP)