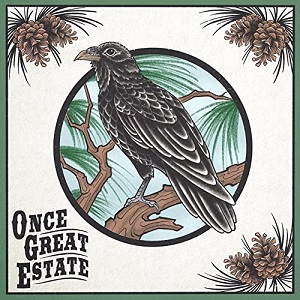 Once Great Escape “Even The Undertaker” (LP)

The album kicks off with a track titled simply, “Intro,” with the delicately strummed chords of a nylon string guitar. There’s a single spoken word verse, Let us live/ so that when we come to die/even the undertaker will be sorry. It’s dramatic , ambiguous, and even a little haunting, but does an effective job of setting the tone. There are several themes explored on Even The Undertaker, but the prevailing one, seems to of course be, death. It’s the relationship that we all have with our impending expiration, and everything we do, that Once Great Estate, seems most infatuated with.

At over 6 minutes, “Florida Man” is the longest track on the album. It’s a biographical snapshot of an unnamed gentlemen, who we can deduce is most likely from the sunshine state. Horenbein describes his life in painstakingly drab detail, which might be symbolic of his simple life, and even simpler views. We get the impression that our subject is a conservative, with lyrics that describe conspiracy theories, and awaiting the next civil war. All in all, this one is a little longer than it should be, and could use a bit of adventure, dynamically. On the bright side,  drummer, Steve Burke, really shines on the track.

“Shelbyville Inn” is somewhat antithetical to the aforementioned. It’s bright, swinging, and lively. This one feels and sounds like a potential single for the record. The band displays tremendous interplay on this track, with fiddler, Christopher Ash, on absolute fire at certain times. “Shelbyville Inn” is likely to have more mass appeal than many other tracks on the record, simply because of its immediacy and charm.

Then there’s the Charlie Daniels like, “Even The Undertaker,” which is the first actual song from the record. Much like “Shelbyville Inn,” this one greets you a little more gregariously, even if the subject matter is a bit grim. As it stands, Even The Undertaker is somewhere between an EP and an LP. At 8 official tracks, and with about a 40 minute run time, it leans closer to the latter. Once Great Estate have given us just enough to form an opinion of them, here. While there are some production issues, including some glaring mistakes that should have elicited additional takes, the album does have a defining texture. Horenbein still seems to be finding herself as a vocalist, and her shyness is so thick, it leaps from the speakers at times. Having said that, there are genuine moments of compositional gold, on this record.