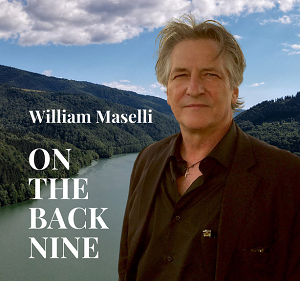 William Maselli’s “Feeling Good About Us” from his album release On the Back Nine expresses a welcome note of optimism in a period when hope seems scant. Penned by Steve Brochu, the track hails from the sessions for Brochu’s album Friendly Territory but Maselli interprets the song as if he composed it in white heat minutes before recording the song. It isn’t that Maselli attacks the words, throwing the full weight of his personality behind Brochu’s writing, but rather that he fully engages each line. There is no coasting.

This is unadulterated pop and that’s not a slight. Maselli and his collaborators, including Brochu on guitar, bass, and backing vocals, work together well enough to conjure a full and robust band performance. It explores well-traveled territory without ever wearying listeners and the setup is traditional. Drummer Jim Begley and guitarist Frank Jones join Maselli and Brochu for the recording and the former pairs with Brochu to form an impressive rhythm section.

The accompanying video for “Feeling Good About Us” doesn’t utilize much original footage. This is not a drawback, however, as Maselli has chosen evocative and high-quality images often dovetailing into the song’s words. The clip is a lyric video, an ever-popular staple, and it should prove to be an effective promotional tool for this song. The conclusion includes credits for the song’s recording and production; keen eyed listeners will spot a minor error, but it doesn’t diminish the video.

Maselli’s ability to inhabit songs such as this is remarkable. It is even more so considering that this style is far from his first love. He has devoted much of the last twenty years towards completing the operas Draculette and Spirit Fire, but this is a musical artist with impressive flexibility. He sings “Feeling Good About Us” with a life-affirming fire in his voice. The “speaker” in this song has a bounce in his step without ever being obnoxious about it.

It bodes well for his album release. He has not, by his own admission, written a pop song since 1990 but has adopted several classical compositions into mainstream form. Attentive listeners will hear the formal training in both the sound of his voice and phrasing, but he makes an emotional connection with the material rather than relying on technique alone.

It has an attention-grabbing live sound. Many listeners will enjoy the song for a variety of reasons, but the clear distinction between the song’s instruments has immediate appeal. Balancing that separation with its impressively unified sound exhibits a kind of magic we associate with the best performers, producers, and songwriters.

Perhaps songs such as this and the album On the Back Nine will garner enough positive attention that Maselli further explores his pop talents and start writing in that vein again. He has the potential to reach a wide audience with material such as this and it comes across as an artistic statement that never compromises himself for commercial notice. We are hearing at least some measure of who William Maselli is with this track and every sign points to his album being a fully-realized effort.