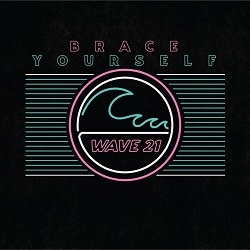 Although it would at first seem driven more by the acoustic strumming we encounter in its opening bars than palm-muted electric guitar parts, the quiet pulsations of the latter wind up lending a lot of soul to Wave 21’s “Why Does It Happen” that wouldn’t be present in the music here otherwise. Intricacies of every kind can be found hiding behind some of the biggest moments in Wave 21’s new album Brace Yourself, and if you like what you hear in this stunning lead single, my gut tells me that the rest of the LP is going to be right up your alley as well.

There’s no shortage of quality deep cuts to be enjoyed in Brace Yourself, and one could even make the argument that Wave 21 didn’t include any segue songs or general filler material between the spotlighted songs in this album, either. “My Latest Song for You” sounds as potent as the Sam Roberts Band-starring “All Over & Over,” nor “Long May You Love,” another single-worthy track in this set (in my opinion, at least). It’s on the shorter side – 33½ minutes long – but this record can’t be accused of patronizing fans with nonsensical additions to the band’s discography.

“Way Far Back,” “Over the Moon,” the cover “Dreams,” and the music video for “Why Does It Happen” are rather experimental in comparison to previously-released content bearing Wave 21’s moniker in the byline, but their country-tinged elements are what make this album such a refreshing treat every time I listen to it. Though there’s more rock in their tree of influences than there is country, the Nashville-esque twang that persists from the start to the finish line in Brace Yourself adds a blunt, bucolic tone to the lyrics that makes them more humanized than they already would have been, which is something missing from too many pop LPs this season.

Their peers might remain in arrested development forever trying to both recycle the concepts of their forerunners whilst crafting something that might pass for ‘original’ down in the states or the U.K., but Wave 21’s progress as a band is undeniable when listening to Brace Yourself and their first album back to back. A lot can change in three years, and from the looks of what I’ve just experienced in Brace Yourself, this group has not only found the heart of their true sound but the means with which to present it in the most appealing way possible.