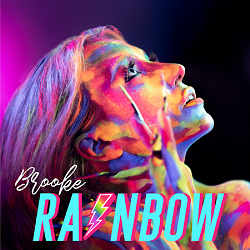 Brooke Josephson has traveled a long way from her beginnings in Warsaw, Indiana. She parlayed her theatrical beginnings into work on several major network television programs and now has a handful of music releases to her credit. She leads off her upcoming EP release Showin’ Up with the single “Rainbow” and it’s an astute pick. This is a track that, in small but significant ways, is born from her Los Angeles home. It blossoms into life with bracing immediacy and has a bright sound gripping listeners from the first. The guitar sound brightens things even further and pops with irrepressible energy. Josephson utilizes a two guitar lineup for the recording of “Rainbow” and the axe wielders, Tim Pierce and Chris Nordlinger, work quite effectively as a tandem.

Pierce handles bass playing duties on the track as well and contributes tasty playing, but drummer Seth Rausch is the rhythm section’s star. His muscular playing has ample finesse when necessary but it’s his time-keeping skills that distinguish “Rainbow”. Once the drums come in, Rausch’s consistency gives the single an unwavering pulse everything else builds around. The single’s sound captures his playing with snap and warmth.

The video radiates great warmth as well. The vivid colors present from the outset and the trio of photography director Ioana Vasile, colorist Anastasia Shepherd, and video director Michelle Bossy are responsible for orchestrating those elements in a lively composition. Bossy adopts a familiar approach for the video, but her touch demonstrates a sureness of touch and individual style that viewers will respond to. The video is an all-around polished and professional package.

Her vocals are powerful yet have tremendous commercial appeal. Adding backing vocals and even a children’s choir to support her performance may seem, to some listeners, like too much of a good thing but others will feel like these contributions underline the excellence of her performance. Josephson’s interpretive powers enable her to inhabit each of the song’s lines. It is notable, however, how she never pushes too hard. She has a keen sense of how much she should give to herself to the song and never goes too far.

Josephson wisely never bites off more than she can chew, and the song’s running time illustrates it. Each passage flows from one into the other with naturalness and it is clear, in my view, that she conceived the song almost in its entirety before ever recording. It has an affirmative message that never risks heavy-handedness or too much sentimentality. “Rainbow”, instead, reflects Josephson’s growing maturity while still harboring widespread appeal.

It is a fantastic way to kick off her new release. Based on “Rainbow”, Josephson’s admirers can expect Showin’ Up will make an enormous impact on the 2021 music world and this singer/songwriter’s burgeoning career. She’s wildly talented, a skilled performer as well as a writer and musical force, and her humanity shines through on every project. She understands how to embody human experience through her art, and it is a gift that should serve her in good stead throughout life.