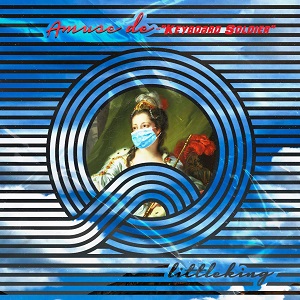 The story of Little King is one that spans over two decades. Their newest album , Amuse De Q, is a testament to their staying power, or perhaps more accurately, their will to survive. Ryan Rosoff is the founder of Little King, and throughout the band’s 20 year history has been the only consistent member. With their earliest roots in El Paso, TX, Little King’s journey has taken them across the entire country, from Seattle to Delaware. In that time, the band has released 7 studio albums, with the latest being, Amuse De Q.

The band’ sound is difficult to describe, as it has progressive elements as well as experimental rock and alternative tones, and even an occasional smattering of punk. You could say it’s highly original, which has some truth, but perhaps more so, their music is highly personalized. Rosoff is one of those artists who isn’t afraid to see the world through his own eyes. Many of the band’s previous works have been concept albums, and Amuse De Q is centered around a few core topics. Written and recorded during and around the height of the pandemic era, Amuse De Q has a decidedly modern feel to it.

“Keyboard Soldier” is the first single off of Amuse De Q, and most of us will probably know what it’s about, based on the title, alone. Instinctively, and perhaps a bit mischievously, I was glad to see this topic being tackled on record, by a competent act, like Little King. There’s a very staccato heavy opening, that is somewhat derivative of Toxicity era System Of A Down. You can hear the temperamental exhaustion in Rosoff’s voice, when he asks “what’s the password in this place?” This one is likely dedicated to those oblivious souls, who don’t realize it’s about them.

Heavy is the word of the day for the album closer, “Omega Son.” It’s a heavy song in the slang sense of the word, but it’s also heavy on dynamics and musicality. The guitar work is in top form, here, and the snare sound the band is able to capture, might steal the entire show. Covers his eyes/everything dies/vaporized against his will. The lyrics sound like that of the plight of the disoriented and/or traumatized protagonist of a sci-fi novel. Fans of Coheed and Cambria will enjoy this well imagined, and highly unique piece.

At 7 songs, Amuse De Q is a good length for what is most likely considered an EP. Some of the songs, clock in at around 6 minutes, but most hover in the 4 minute range. Little King and its fearless monarch, Rosoff, are incredibly well tenured and very in touch with their own identity. As a result of their dense and complex history, Little King have given us one of the more original sounding albums in some time. After two decades of countless stop and starts, Little King has once again overcome its hurdles to reign over the land of loud.