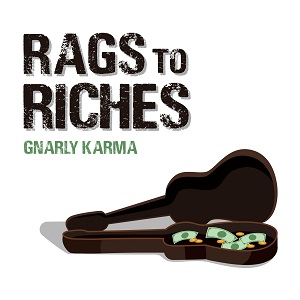 Huntington, New York’s Gnarly Karma are the sort of all-embracing rock band the times call for. Their latest single “Rags to Riches” is the latest in a trio of singles geared to expose the five-man outfit to a larger audience than ever before. Composed by singer-guitarist Michael Renert and drummer Jarrod Beyer, “Rags to Riches” casts an elegiac mood over listeners without ever sounding obscure and Renert’s impassioned singing never lapses into histrionics. There’s a definite retro vibe hanging from the arrangement, but echoes of the past are never the band’s lynchpin for listener’s attention.

One focus area of focus for the band is creating memorable grooves. Beyer and bassist Ryan McAdam are a sinewy rhythm section yet unobtrusive; the unifying aesthetic defining much of the band’s direction is ensemble, rather than virtuoso, playing. They present a two-guitar attack but identifying any six-string overkill in this track is difficult. Hitting an nuanced feel such as this isn’t easy but Gnarly Karma make it sound effortless.

Renert and his guitar partner Adam Sklar sparkle with soulful and seamless interplay throughout the cut. Their playing peaks at all the right moments and song’s sound, courtesy of Mario Borgatta and Steve Pagano, has a warm inviting quality many listeners will find appealing. There’s no question this song will easily translate into live performance and its bracing immediacy is apparent with even a single listen.

The lyrics are notable. Press materials dub them an alternative band, but many listeners will think singer/songwriter is much more appropriate as there is a measured point of view present in their work. Gnarly Karma possesses gifts that defy easy labels. The words for “Rags to Riches” wrestle with eternal human themes, really, and the song uses conversational language to convey its message.

It, likewise, never “talks down” to its audience. Bands such as Gnarly Karma and others, spanning multiple genres, share a penchant for loyal fanbases thanks to their relatability. It never comes at the expense of their identity. “Rags to Riches” is never pandering to the lowest common denominator, but it hits an universal note, nonetheless, and stirs the human heart without gimmicky.

Gnarly Karma demonstrates a sure instinct for song length. “Rags to Riches” never bites off more than it can chew and progresses in such a way it pays off at all the right moments and never overstays its welcome. Some may say it is a predictable track; they are missing the point. This band isn’t attempting to remake the songwriting wheel, but they are intent on proving themselves capable of pouring old wine into new bottles.

The hopeful ebbing of the pandemic holds the promise Gnarly Karma will continue building the stellar live reputation that has landed them plum spots supporting Everlast, Dave Matthews Band, Less Than Jake, and five star venues such as My Father’s Place. “Rags to Riches” is the just the sort of song they needed to release right now, it has the effect of looking back over the last eighteen months while still pushing forward into a brighter dawn ahead.