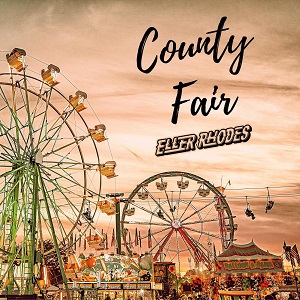 There’s a lot of good music coming out of the Midwest at the moment, and in the country genre, one of the more talented duos to catch my attention this summer has been Eller Rhodes. Comprised of a father and daughter with enough musical experience to really get your attention right out of the box, Eller Rhodes play a simple brand of country and folk music combined with light pop aesthetics in their songwriting style that immediately scored points with critics upon the release of last year’s “Homesick.” Now back with a new single in “County Fair” this July, the pair are arguably sounding even bigger than their big-league streaming numbers would initially reflect. This is a competitive age in Nashville, but these Hoosiers came ready to play with the best of them.

“County Fair” has more obvious roots music influences than “Homesick” did, and I think you could even deem it a crossover folk song based on the way the vocal and the piano parts are made to interact with each other. There’s not the same cohesion that we would find in a mainstream country release here, nor is there a plasticity that is frequently found in even the most earnest of country/pop hybrids to come out of the underground these days. Jim Witmer, the lead vocalist in Eller Rhodes, is too loose with his lyrical approach to remind me of anyone other than a bygone generation of singer/songwriters too apolitical for folk music and too rebelliously melodic and freewheeling for the country community.

These lyrics probably wouldn’t have the weight they do in “County Fair” were they not being set to such a tempered beat, and rather than feeling a little slow, every deliberate pulsation from the drums feels sharp and not sheltered by a gush of melodic frills. There’s nothing quite like a pop-structured acoustic song that feels as crisp and natural on a good pair of speakers as it would performed right in front of you at, well, a county fair, and this is one of those rare singles that takes us right to the concert without ever having to leave our homes. It’s arriving a year after the fact, but that only further separates Eller Rhodes from the trend chasers in and outside of their local scene.

I do not believe that “County Fair” is a full measurement of what this duo could potentially produce together in the future, but I do think it gives us a lot of insight into who they currently are as an act and what they might evolve into if provided the right circumstances. There are still a couple of rough edges in their sound, but hey – compared to what has been passing for ‘country’ on the majority of your FM dial in recent years, the few sonic shortcomings in “County Fair” authenticate the drive of its creators. Eller Rhodes care about making country the way it was always supposed to be made; clean and untampered with, and that’s what this single is all about.

The music of Eller Rhodes has been heard all over the world in partnership with the radio plugging services offered by Musik and Film Radio Promotions Division.  Learn more https://musikandfilm.com